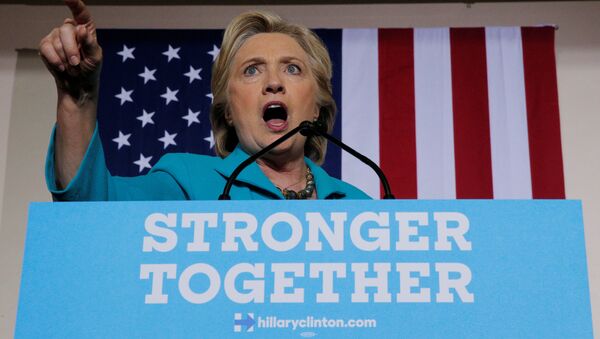 It appears that the outgoing Obama administration is trying to wreak revenge on US President-elect Donald Trump over his victory in the 2016 presidential election, Russian Foreign Ministry spokesperson Maria Zakharova remarked in an interview with Sputnik, commenting on the latest anti-Russian sanctions introduced by Barack Obama.

"Honestly, there is a feeling that the Democratic team is now just trying to take revenge on Trump for the victory, taking plainly absurd decisions a month before his inauguration," Zakharova told Sputnik on Saturday.

US Dems' Recent Decisions Revenge for Trump's Election Victory - Moscow
On Thursday, the Obama administration announced the expulsion of 35 Russian diplomats, the closing of two Russian diplomatic compounds and imposed new sanctions against six Russian individuals and five entities over Moscow's alleged interference in the US presidential election.

The Obama administration's move resembles nothing so much as an act of vengeance directed at their successors, according to Vzglyad's political analyst Evgeny Krutikov.

However, the analyst believes that Hillary Clinton's team could have been behind the decision to expel 35 Russian diplomats and impose sanctions on Moscow over the so-called "vote hacking."

"The expulsion of the Russian diplomats appears to be not a 'hysteria', but an action 'for internal use' initiated by Hillary Clinton's team rather than the outgoing Secretary of State John Kerry. Russian diplomats were accused of 'involvement in hacker attacks', which allegedly 'affected the outcome of the US presidential election.' Now when nothing prevents US President-elect Trump to take office, the Clinton team continues to work out an acceptable version of what lay behind their defeat. They don't care whether their actions damage the US-Russian relationship," Krutikov suggested.

With New Sanctions, Obama 'Plants a Bomb Under Trump's Ties With Russia'
The Russian analyst believes that John Kerry could have hardly endorsed such "clownery," since he wants history to remember him as a sane and prudent politician.

As for the Clinton team, they still believe that they will return to the US political arena in a few years, Krutikov remarked.

However, the Kremlin has managed to outmaneuver the Obama administration by refusing to take reciprocal measures against the US.

Quite the contrary, Russian President Vladimir Putin invited all children of US diplomats accredited in Russia to the New Year and Christmas children's parties in the Kremlin.

"We regard the recent unfriendly steps taken by the outgoing US administration as provocative and aimed at further weakening the Russia-US relationship. This runs contrary to the fundamental interests of both the Russian and American people," the Russian President said in an official statement.

Although Russia has the right to retaliate, it "will not resort to irresponsible ‘kitchen' diplomacy," Putin pointed out.

"We will not create any problems for US diplomats. We will not expel anyone. We will not prevent their families and children from using their traditional leisure sites during the New Year's holidays. Moreover, I invite all children of US diplomats accredited in Russia to the New Year and Christmas children's parties in the Kremlin," he emphasized.

"It is regrettable that the Obama Administration is ending its term in this manner. Nevertheless, I offer my New Year greetings to President Obama and his family," the Russian President added.

In her Saturday interview with Sputnik Maria Zakharova underscored that the Russian Foreign Ministry is guided by the assumption that "it is necessary to resolve the deadlock in the US-Russian relations."

The Foreign Ministry spokeswoman noted that Moscow is waiting for the new administration to arrive at the White House, denouncing the speculation that Moscow has placed its stakes on Trump.

"Claims of the US establishment that Russia had put stakes on Trump and that he was Russia's candidate is one of the elements of the information war. This not true," Zakharova stressed.

"We, as the Foreign Ministry, can work with any team which represents the authority," she said.