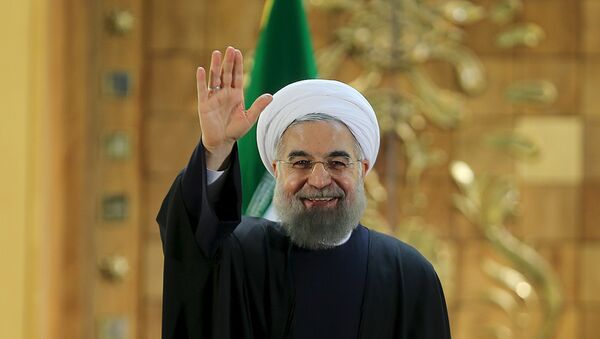 Tehran has shown interest in signing a temporary deal with the Eurasian Economic Union (EAEU). While Iran has already established close relations with Russia and China, Tehran's future membership in the EAEU will further strengthen the country's alliance with the Eurasian major players, Iranian expert Hamidreza Azizi told Sputnik.

"The president of Iran has shown interest in signing a temporary deal with the EAEU, leading to the creation of a free trade zone. Armenia is actively assisting the negotiations between Iran and the Eurasian Economic Commission, aiming to sign the agreement fast," Sargsyan said at the Supreme Eurasian Economic Council meeting in St. Petersburg.

Speaking to Sputnik Persian, Hamidreza Azizi, assistant professor of regional studies at Shahid Beheshti University, Tehran, and expert in Eurasian affairs, underscored that one of Tehran's foreign policy imperatives is to bolster economic ties with Russia, the Caucasus and Central Asia.

"When in August 2013 Hassan Rouhani assumed the presidency, he proclaimed the policy of economic integration with key regional players — Russia, Central Asia and the Caucasus. For the first time since the formation of the CIS [Commonwealth of Independent States] the development of relations with the countries of the bloc has become Iran's foreign policy priority," Azizi emphasized.

Iran, EAEU May Sign Temporary Deal for Future Free Trade Zone
Last week the Iranian President made a tour to Armenia, Kazakhstan and Kyrgyzstan aimed at bolstering economic and political ties with the nations.

"In the current circumstances of the region, the more we improve relations with the countries of the region and our neighbors, the better we can stand against insecurity, instability and terrorism that have engulfed the region," Rouhani told reporters after returning from his Central Asian and Caucasus tour.

"During the visits, we also discussed the development of ties between the Islamic Republic of Iran and the members of the EAEU in the fields of tariffs and preferential trade and Iran's membership in the union," the Iranian President highlighted.

Azizi underscored that one should not overlook the role played by Iran's strained relations with the US and EU in accelerating rapprochement between Tehran, Moscow and Beijing.

Fortunately, the conclusion of the Iranian nuclear deal has paved the way for deepening Iran's collaboration with other countries and blocs, he added.

"In light of this important event Dr. Rouhani has committed himself to active implementation of his presidential program aimed at joining regional unions and blocs, in particular, the EAEU," the Iranian academic elaborated.

Azizi pointed out that Russia is playing an important part in this process.

"Moscow plays a crucial role in this process," the academic noted, "In the past two years the Russian Federation has signaled keen interest and then has taken necessary diplomatic efforts to form regional alliances with influential political players," he told Sputnik, referring to Iran as one of these political actors.

Eurasia's Integration: North-South Corridor May Soon Replace Suez Canal
Azizi called attention to the fact that Moscow and Tehran are both interested in further rapprochement.

The academic added that in the last few years Iran has bolstered cooperation with many of EAEU member states.

He referred, for instance, to the Kazakhstan-Turkmenistan-Iran railway project — part of the comprehensive North-South International Transport Corridor initiative — stressing that these efforts have created "fertile ground for Iran's membership in the EAEU."

"Iran's foreign policy is aimed at strengthening and expanding partnership with key players on the political arena through joining regional alliances," the academic explained.

"Yes, we have very strong ties with Russia and China. But membership in such organizations as the EAEU can further strengthen our cooperation. So, I believe that the next step on this way is to study all the details for this integration," Azizi underscored.

Growing Alliance: Shanghai Bloc Taking Steps Toward Iran
In addition, Iran is considering joining yet another influential Eurasian bloc — the Shanghai Cooperation Organization (SCO). The political, economic, and military was founded back in 2001 in Shanghai by the leaders of China, Kazakhstan, Kyrgyzstan, Russia, Tajikistan, and Uzbekistan.

In his November interview with Sputnik Persian, Azizi underscored that Iran is committed to further rapprochement with China and Russia within the SCO framework.

"After an agreement was reached on the Iran nuclear program and the realization of the Joint Comprehensive Plan of Action (JCPOA) has been kicked off, all barriers to Iran's integration to regional and international organizations have been removed," the academic told Sputnik in late November.