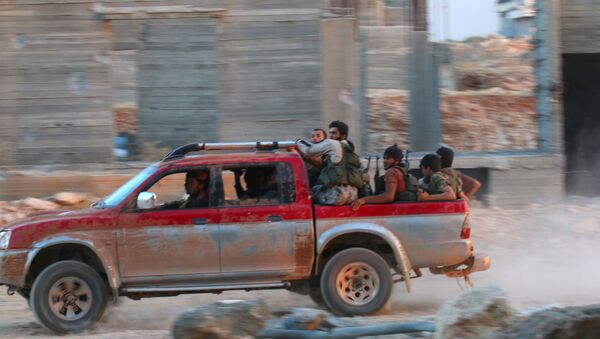 © REUTERS / Ammar Abdullah
Subscribe
In its pursuit to change the Syrian government, Obama administration is ready to help any 'destructive forces', including Jabhat Fateh al-Sham, Russian Foreign Ministry said in a statement on Saturday.

Russia to Respond to 'Destructive Policy' of US Sanctions Expansion
Commenting the issue of expansion of the US sanctions against Russia, the Foreign Ministry said that Moscow sees this act as a way to punish Russia for helping Syria battle terrorism which is a threat to the whole world.

"It has long been noticed that, under the current administration, Washington in its pursuit to shift power in Syria is ready to help any destructive forces. [It is] protecting and covering Jabhat al-Nusra terrorist group that is none other but a subdivision of al-Qaeda, which has commited the most horrible terrorist acts in the history of the US," the statement said.

"It seems that the White House has forgotten that, under the US law, aiding terrorism is a criminal offense," the Ministry pointed out in the statement.

On Friday, the US Department of Commerce added 23 Russian entities to its Ukraine-related sanctions list.

On December 20, Washington sanctioned seven Russian citizens, eight entities and two vessels due to activities related to the conflict in Ukraine.

000000
Popular comments
It has got to be hard on Obama when he realizes that, on the one hand, that he is not a friend to or of Israel. On the other hand, his friendship with the terrorists that Israel has set up to, possibly, fail, which Obama is authorized to use on Israel's behalf, is, actually, making him look like the "chickenshit" that Netanayhu says he is. How sad...
marcanhalt
24 December 2016, 16:59 GMT2
000000
Its no longer news that the Obama administration has been supporting terrorism all over the globe, the extension of the said sanctions is asking Russia to be Economically Independent