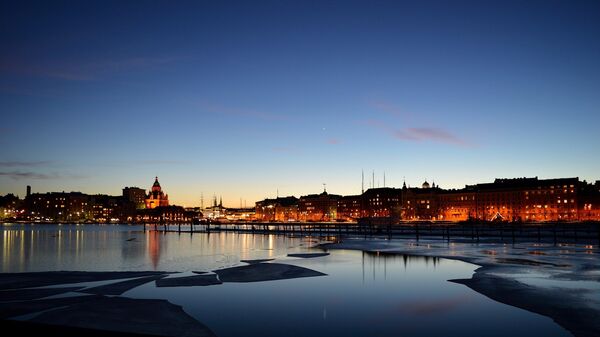 © Photo : Pixabay
Subscribe
International
India
Africa
The Persian Gulf Kingdom of Bahrain has shown an interest in financing the construction of a large mosque in Helsinki, Finland. The building will cater to Helsinki's growing Muslim diaspora, yet may trigger previously unbeknown friction between Shias and Sunnis in Finland.

Radicalism Causes Danes to Rethink Proposed Plans for ‘Super Mosque'
At present, Muslims residing in the Finnish capital believe that the city lacks a sufficient number of mosques and Muslim prayer rooms. The leaders of the Muslim community have previously griped that prayer rooms tend to become overcrowded during major festivals. The situation may become further exacerbated by last year's influx of refugees from predominantly Islamic countries.

Today, the Helsinki City Council is preparing a plot for a large new mosque in collaboration with the Foreign Ministry, the Finnish daily Hufvudstadsbladet reported.

According to Sami Haapanen of the Helsinki Real Estate Office, Bahrain has demonstrated that it is willing to finance the project.

"We will hear experts and liaise with various agencies. We must ensure that the funding comes from legitimate sources," Haapanen told Hufvudstadsbladet.

Shoo! Finland Starts Demotivating Facebook Campaign to Scare Off Asylum-Seekers
The Helsinki Real Estate Office will address the issue during the coming spring at the earliest. The mosque is scheduled to be built where the Hanasaari power plant now stands. The power plant is scheduled to shut its doors in 2024; before that, the mosque cannot be put into service for safety reasons.

Earlier, Susanne Dahlgren, Islam researcher and lecturer at the University of Tampere, stressed an urgent need for new mosques in Finland. According to her, more mosques and prayer rooms should be built to avoid people praying in the street, as has previously happened during Muslim holidays.

At present, there are about 80 prayer rooms available for Finland's Muslim population of about 65,000 Muslims, including about 30 in the metropolitan area.

"Mosques do not contribute to radicalization. On the contrary, they provide a welcome signal," Dahlgren ventured in an interview with Finnish national broadcaster Yle.

Enemy Within? Finland Flustered by Growing Terrorist Threat
The question of funding is of major importance due to fears that investors could potentially make demands regarding both the construction and operation of the future mosque.

According to Dahlgren, Saudi Arabia is one of the countries which previously showed a keen interest in the construction of mosques in Europe. However, Saudis are known for spreading their form of Islam, which Finland "would rather avoid."

According to Abbas Bahamopour of the Shia Imam Society of Finland, the funding may be a tricky question.

​"If the money for the mosque construction comes from Saudi Arabia or Qatar, that is hardline Muslim, it can present problems that we do not want in Finland," Bahamopour told Yle.

The official and dominant form of Sunni Islam in Saudi Arabia is commonly known as Wahhabism or Salafism and is often described as 'puritanical,' 'intolerant,' or 'ultra-conservative,' yet considered "true" by adherents.

No Place Like Home: Iraqi Returnees From Finland Face Torture and Death
In Bahrain, there are no official figures for the proportion of Shia and Sunni among the local Muslims, but approximately 45-49 percent of Bahraini Muslims are thought to be Shia.

In Finland, the number of Muslims is expected to grow to 190,000 (or 3.5 percent of the population) by 2050. Finnish Shia Muslims are estimated to comprise 10-30 percent of the total number. In 2012, an Iranian-funded Shia Mosque was inaugurated in Helsinki.