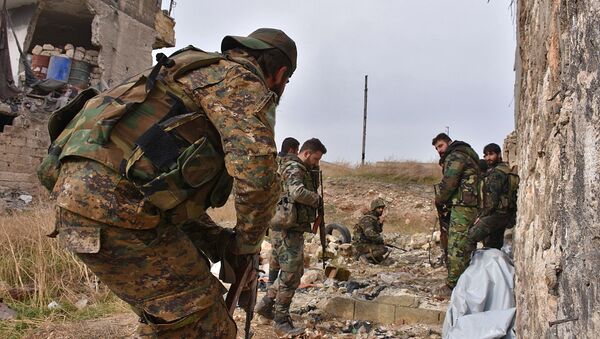 Suliman Mulhem
All materials
The Syrian army, backed by Russian warplanes, and an array of allied militias, is now in control of over 70% of the East Aleppo pocket. Although the complete liberation of Aleppo is inevitable, pro-government forces are in need of further improvements to help them score a decisive, nation-wide victory in a reasonable timeframe.

Recently, there has been a new recruitment drive in the armed forces, with the announcement of a new Fifth Stormtrooper Corps of volunteers. The 5th Corps will be comprised of voluntary fighters, and according to a Tweet by a student studying in Tartus province of Syria, more than 1,000 volunteers (from Tartus province alone) applied to join this new force shortly after it began accepting volunteers.

It is believed that Russia may play a large role in the training and funding of the 5th Corps, like they did with the 4th Assault Corps. The 4th Assault Corps was launched shortly after Russia’s Air Force intervened in the conflict, at the request of Damascus.

The Tiger Forces, led by Major General Suhail al-Hassan, have proven to be one of the most effective groups in Syria, spearheading many successful offensives. Footage of their previous military operations shows that the group has access to communication equipment, allowing them to coordinate plans and react quickly to on the ground developments. The same cannot be said for many other pro-government forces, including regular units from the Syrian Army.

This is perhaps one of the only areas where the armed opposition is better equipped than President Assad's forces. Since the early days of the conflict in Syria, the US has provided the militants with extensive communications equipment and technology. Russia should consider investing in this area as part of its plans to develop the Syrian army, in order to aid government forces on the ground.

Many regular, non-elite units of the Syrian army, suffer from low morale, relative to other groups. This has greatly hindered their performance on several key fronts. Rebranding certain components of the Syrian army could provide them with a morale boost. They could potentially be rebranded as the Defense Companies. The Defense Companies were a well-trained, notable paramilitary group that operated in Syria a few decades ago.

As well as improving the spirits of current fighters, it may also encourage Syrians, especially those above the age of around 45 (who would have been aware of the organization while it was at its peak), to join, as it is likely to be considered a prestigious, legacy force.

Needless to say, pro-government forces need better training or monitoring to prevent unnecessary mistakes from occurring. For example, during many battles, opposition groups have been able to inflict heavy casualties on pro-government fighters because they are standing in an open area, together, in large groups. Losses sustained like this are avoidable, and should not occur.

On many occasions, Islamist fighters have used suicide vehicle-borne improvised explosive devices (SVBIEDs) to penetrate defensive positions. In the past few months, the Syrian Army has seemingly improved its ability to effectively deal with SVBIEDs, but they remain vulnerable to such attacks.

Anti-tank guided missiles, such as the BGM-71 TOW, have destroyed many SAA tanks, degrading its overall strength. Russia should potentially allocate specific resources to find and destroy ATGMs held by Islamist groups. Furthermore, tanks and armored vehicles should be installed with reactive or slat armor to reduce the damage done to the occupants.

On another note, the Syrian Army's General Command could deploy fighters to their home provinces, if possible, to bolster the motivation of troops, or allocate soldiers to areas where they have experience fighting, as this may give them a tactical advantage due to their knowledge of the territory and terrain.

From a strategic perspective, pro-government forces should focus on lifting sieges, such as the siege on Deir-Ezzor city. This will free up resources, which can then be deployed to other battlefronts. Small pockets of resistance should also be prioritized, as they require a sizeable commitment of troops to monitor, potentially draining the army's resources and manpower.

While many of these points are fairly basic, implementing them will greatly increase the strength and ability of the Syrian army and its allies. Not only will this end the conflict quicker, but it will also reduce the number of casualties sustained.