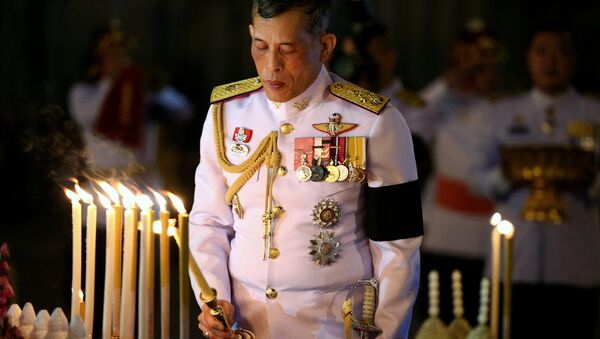 © REUTERS / Athit Perawongmetha
Subscribe
There is more to Thai activist Jatupat's infamous Facebook post than meets the eye, geopolitical analyst Tony Cartalucci told Sputnik, adding that Jatupat belongs to a Western-backed group of "student activists" engaged in undermining the Thai government. Cartalucci noted that the group's activities can be traced back to Soros's Open Society.

The post in question was shared by Jatupat following Thailand's Crown Prince Maha Vajiralongkorn taking the throne on December, 1. The link led to a BBC Thai story claiming to be the new monarch's biography.

The story was found insulting and the student was charged with lèse-majesté under Article 112 of Thailand's criminal code. The Article 112 makes it illegal to defame, insult, or threaten the king, queen, heir-apparent, or regent. Those who violate the law face a sentence of three to fifteen years of imprisonment.

Still, on Monday The Bangkok Post reported that Jatupat was temporarily released on bail to pass his final exam in the Khaon Kaen University.

"Mr. Jatupat's legal team submitted a petition seeking his temporary release on the grounds that Mr. Jatupat was a suspect in four political cases and never posed a flight risk," the media outlet said.

However, it appears that the problem requires a more scrupulous analysis.

In his interview with Sputnik Bangkok-based geopolitical analyst Tony Cartalucci revealed that there is more to the situation than meets the eye.

"Jatupat Boonpattararaksa belongs to a group of 'student activists' supported by the US-EU governments and engaged in undermining both the current government of Thailand and the nation's monarchy. There are literally photos on this group's Facebook page of them attending events at the US Embassy and posing with European envoys," Cartalucci told Sputnik.

"This follows a 2014 coup which saw a US-backed client regime headed by Thaksin Shinawatra and his sister Yingluck Shinawatra ousted from power," the geopolitical analyst underscored.

"The US has invested years and billions of dollars building up the Shinawatra government and a myriad of NGOs to support them and their political networks. This is not unlike what was done in Libya, Syria, Ukraine, and even in Russia itself ahead of the so-called 'Arab Spring' and other bouts of 'color revolution.' The coup narrowly averted Thailand becoming the next Ukraine," he stressed. 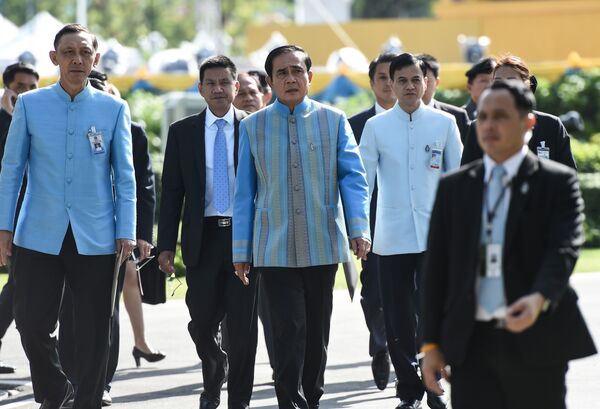 Leaked Memo: Is Soros Planning 'Series of Color Revolutions' in Southeast Asia?
The geopolitical analyst called attention to the fact that among those who raised the alarm following Jatupat's arrest was iLaw "which is funded by not only the US State Department's National Endowment for Democracy (NED), but also George Soros' Open Society — again — the very same organizations underwriting political instability and even violence across the Middle East, Eastern Europe, and even within Russia itself."

"A good question to ask 'activists' like Jatupat who predicate their activities upon human rights advocacy is, where were they in 2013-2014 when protesters called for Shinawatra's government to step down, and violence was used against them almost daily in an attempt to disperse them? Over 20 people died, hundreds were wounded. Where were Jatupat and his 'New Democracy Movement' condemning the violence?" Cartalucci asked.

"They were silent because they are politically motivated agitators simply hiding behind human rights and democracy advocacy to advance their and their sponsors' agenda, not actually standing up for rights or democracy," the geopolitical analyst told Sputnik.

The political analyst shed light on Thailand's history as well as a string of Western-backed "color revolutions" which he characterized as part of the West's "hybrid war" in the Asia Pacific region.

Korybko emphasized that Washington is deeply dissatisfied with the new Thai ruling clan and not because it "violates" human rights: the Thai elite which took power back in 2014 has enacted "a geopolitical reorientation towards China precisely at the time when the US is throwing much of its resources behind the 'Pivot to Asia' and building the Chinese Containment Coalition (CCC)."

"Thailand is the most crucial country in mainland ASEAN's current geopolitical framework, bringing together the infrastructural interests of China, India, and Japan, and also being a sizzling political battleground between the US and China," Korybko stressed.