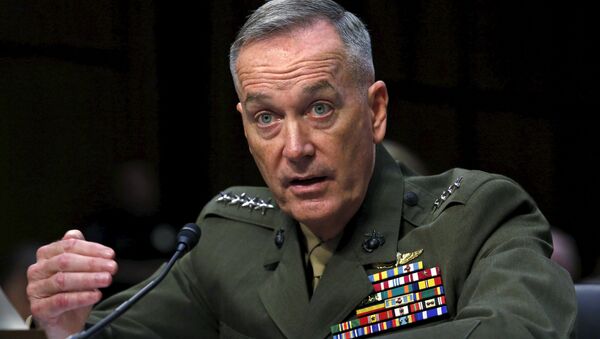 The US Joint Chiefs of Staff are preparing a new military plan that could speed up the defeat of Daesh, something President-elect Donald Trump promised to do on the campaign trail.

Chairman of the Joint Chiefs Marine General Joseph Dunford said the plan will be presented to Trump once he's inaugurated.

The US, in cooperation with local forces, has "made significant progress" in the fight to destroy Daesh, Dunford said December 3 at the Reagan National Security Forum in California. But "there are some things that we probably would bring into the new administration for consideration," he said, Military.com reported.

The advice will not be made public unless and until the new president approves it, the general said.

Earlier at the same forum, Air Force Chief of Staff General David Goldfein said the joint chiefs and other commanders had been at work for months on a classified military strategy for the next president based on the challenges the US military faces, CNN reported.

The report identifies Iran, North Korea, China, Russia and violent extremism as key threats in a detailed annex, though it does not provide formal military responses. Rather, the report is intended to supply a foundation for a new president in making decisions on military spending and other issues.

"It's one of the first times we actually done a classified military strategy with an annex that we have focused on the five global challenges," Goldfein said, according to CNN.

At the forum, Dunford also dismissed the notion — often repeated by Trump — that the US military is under-equipped or in some way outmatched in the world, according to Military.com. Rather, the US military is the finest in the world, with a "competitive advantage over any potential adversary. I have absolute confidence that the joint force today can defend the homeland and our way of life," he said.

The US public should understand that they are funding "the most capable military force in the world," he said.