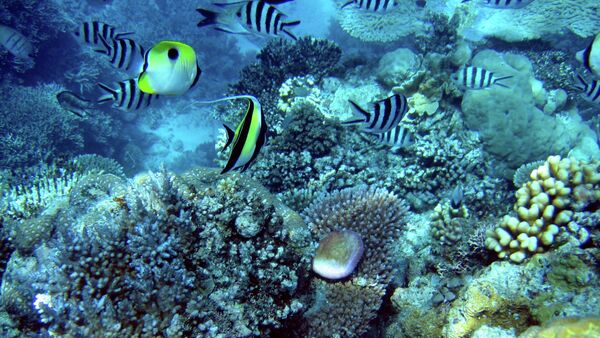 Warm seas killed approximately 466 km of a 700 km stretch of coral reef. The coral is "essentially cooked," Andrew Baird, a professor at James Cook University who participated in the reef surveys, told Reuters on Tuesday.

On the campaign trail, now-Prime Minister Malcolm Turnbull touted that he would devote A$1 billion toward protecting the coral reef. Turnbull has some financial incentive to do so as well: Coral reef tourism attracts approximately $3.9 billion annually, according to a 2013 Deloitte Access Economics brief.

When water gets too warm, coral ousts the living algae on its tissues, causes the coral to calcify and appear white, as it is in fact the algae that gives coral reef its magnificent color. This process, bleaching, is a common defense mechanism for the massive aquatic plants to deal with environmental stressors. But it creates a crucial problem when sea temperatures rise too quickly, as algae are a major source of food for coral. The onset of pollution or overly warm waters from climate change destroys a once flourishing, symbiotic relationship.

The National Oceanic and Atmospheric Services, a branch of the US Department of Commerce, notes that low tides and overexposure to sunlight can also cause bleaching. Nevertheless, environmentalist Charlie Wood, director of 350.org, insists "climate change is killing the Great Barrier Reef," Reuters has reported.

And there is still some hope for parts of the cooked coral—when the bleaching is mild, as is the case in southern parts of the reef, lower temperatures offer hope that parts of the coral can still recover. The scientists noted that in the southern regions of the reef, coral mortality was lower.
Newsfeed
0
Access to the chat has been blocked for violating the rules . You will be able to participate again through:∞. If you do not agree with the blocking, please use the feedback form
The discussion is closed. You can participate in the discussion within 24 hours after the publication of the article.
To participate in the discussion
log in or register
loader
Chats
Заголовок открываемого материала