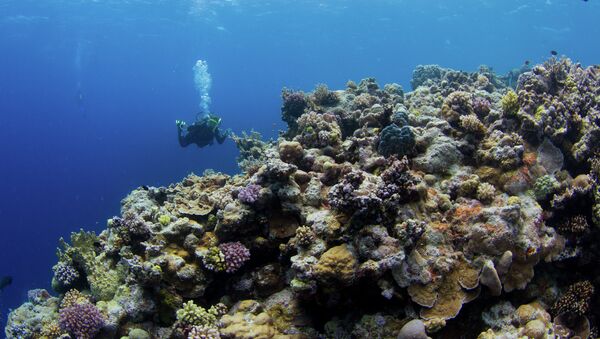 On Tuesday, a new study from the Australian Research Council Center of Excellence for Coral Reef Studies confirmed that over 90% of the Great Barrier Reef has now been irreversibly damaged by coral bleaching as a result of climate change.

The assertions were made after scientists conducted aerial surveys of hundreds of reefs. The researchers stated that as climate change was ongoing, damage is likely to continue. Currently, nearly 50% of the coral is dead or dying.

Bleaching kills the corals and destroys habitats for marine life, occuring when water becomes too warm and prompts the coral to expel the algae inside of it, causing the erosion of the structures, Common Dreams reported.

‘Uniquely Unsuited’: Clinton’s Not the Candidate to Counter Climate Change

"We've never seen anything like this scale of bleaching before," Terry Hughes, director of the research council told the Independent. "In the northern Great Barrier Reef, it's like 10 cyclones have come ashore all at once."

Greenpeace released a statement regarding the findings, and called on the Australian government to make efforts to protect the reef by combating climate change.

“This is heartbreaking news that the Australian Government must act on. It’s not good enough for them to say they care about the Reef while they keep backing the coal industry and avoid tackling climate change,” said Greenpeace Australia Pacific reef campaigner, Shani Tager. “The most pristine part of the Great Barrier Reef is on the brink of permanent damage. Now is the time to act, to put the brakes on the coal industry before this sort of devastating bleaching becomes an annual event.”

“Mining and burning coal is driving climate change and warming our waters and the Reef is getting more and more fragile as a result,” said Ms Tager.