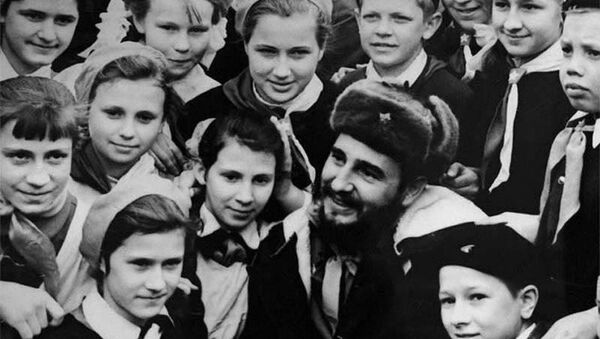 © Photo : Archive
Subscribe
International
India
Africa
Cuban revolutionary leader Fidel Castro has passed away, aged 90. A giant of 20th century politics, Castro's passing has seen a flood of condolences from leaders from around the world. As can be imagined, Russia was no exception. Castro made a decisive personal contribution to the development of Russian-Cuban relations.

On Saturday, Cuba's Prensa Latina news agency reported the death of former Cuban President Fidel Castro. The revolutionary was known for his love of life, and was a figure recognized by both friends and foes as a legend of 20th century politics and history.

World
Former Cuban President Fidel Castro Dies At Age of 90 - Reports
Having overthrown the Batista dictatorship in 1959, Castro and his fellow revolutionaries embraced socialism in Cuba, to the ire of the US superpower, just 90 miles from Cuba's shores. From the 1960s to the 1980s, Castro's Cuba actively struggled against colonialism and Western imperialism, and played an instrumental role in the non-aligned movement. In the 1990s, contrary to the expectations of many, Castro's Cuba not only survived the collapse of the Soviet Union, but lived on and preserved its independence.

Castro's passing has resulted in a virtual flood of condolences from leaders around the world. Russia, which has a long and rich history of relations with Cuba, thanks in no small part to the Fidel's personal efforts, was no exception. Russian officials, including President Putin, Prime Minister Medvedev, senators and lawmakers, have offered their condolences over Castro's passing, and marked their gratitude for the Cuban leader's immense contributions to the Russian-Cuban friendship.

Russian President Vladimir Putin issued a personal appeal to President Raul Castro and the Cuban people. "I express to you and to the whole Cuban people our deepest condolences on the passing of the leader of the Cuban Revolution, your brother Fidel Castro," Putin said in a telegram sent to the Cuban president.

World
Putin: Fidel's 'Memory Will Forever Remain Within Hearts of Russian Citizens'
"The name of this outstanding statesman is rightfully considered to be a symbol of an entire era in contemporary world history," the Russian President added. "The free and independent Cuba that was built by him became an influential member of the international community, and has served as an inspiring example for many countries and peoples."

Putin stressed that Fidel Castro had made a huge contribution to the development of Russian-Cuban relations, and to strategic cooperation between the two countries in all areas. Castro was "a sincere and reliable friend of Russia," according to the president. 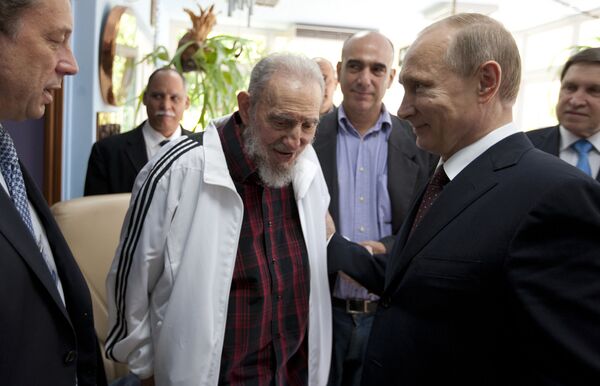 "This strong and wise human being always looked with confidence to the future," Putin's telegram continued. "He embodied the highest ideals of politics, citizenship and patriotism, and was sincerely convinced in the rightness of the goal to which he devoted his whole life. His memory will live on forever in the hearts of Russian citizens," Putin concluded, adding that he wished the Castro family "courage and steadfastness in the face of this irretrievable loss."

Russian Prime Minister Dmitri Medvedev also offered his condolences, saying that Castro was not just a politician and a leader, but a remarkable person.

"The friendly, allied relations between our country and Cuba have been built thanks to his personal contribution," Medvedev said. "We last spoke on the telephone in August of this year, when Fidel Castro celebrated his 90th birthday. He was keenly interested about what was happening in the world, and in Russia, and had a keen mind…to the end."

"I will always remember my meetings with this remarkable man. My deepest condolences to his family and friends, and to the entire Cuban people," Medvedev concluded.

World
Fidel Castro's Death Loss to Humanity - Russian Lawmaker
Konstantin Kosachev, Russian Senator and chairman of the Senate's Foreign Affairs Committee, said of Castro's death that it was a loss not just to the Cuban nation, but to humanity as a whole. "…The scale of this personality was without exaggeration a global one, and had a real impact on the course of world history. This is not something which can be said about the passing of just any politician," the senator noted.

Kosachev added that he has "absolutely no doubt" that the Cuban leader would be written into human history "forever." Castro, he said, had "given himself unreservedly to the service of his motherland, to his people and to his ideals…Integrity and courage, honesty and an unbendable will – these are the qualities that determined the nature of Fidel's efforts, and predestined sympathy for his life's work."

Kosachev recalled that Cuba under Castro had managed to withstand the "most severe" forms of external pressure, to defend its sovereignty and their right to development in accordance with their own national interests. At the same time, Castro had always loved Russia and the Russian people. This, the senator noted, was the reason why El Comandante has remained popular and beloved in Russia even after the collapse of the USSR. 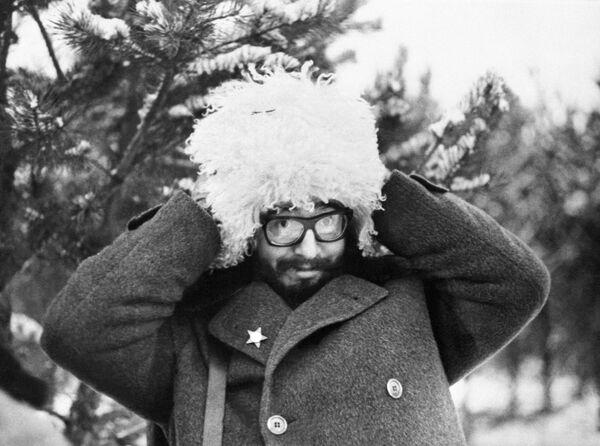 Cuban First Secretary of the Cuban Communist party and President of the State Council Fidel Castro is seen wearing a chapka, in January 1964, near Moscow, during his official visit to USSR
© AFP 2023 / TASS

"Castro was a human symbol, like his comrade-in-arms Che Guevara. Through almost the entirety of his fascinating life, beginning with the legendary landing of the Granma, he served as an example to many people in the world, especially in Latin America, as a man of indomitable will, revolutionary romanticism, and sincere faith in the Idea," Kosachev concluded.

Russian Communist Party leader Gennady Zyuganov also offered his condolences, and vowed that Russia would "do everything possible to perpetuate Castro's memory."

"This was a titan of contemporary politics, a man who devoted his life to working people, an example of the struggle for justice and dignity, a man who survive dozens of attempts on his life," Zyuganov said.

Castro, Zyuganov noted, "invigorated humanity's consciousness, which has been rotting. He contributed his immense talent to development, especially in the areas of education and healthcare. And Cuba has become an example not only for Latin America but for our entire world. Life expectancy in Cuba is much higher than it is in many affluent countries."

The Communist Party leader criticized Mikhail Gorbachev and Boris Yeltsin's "betrayal" of Castro and Cuba, but stressed that country "not only survived this, but came out victorious."

Waking up to the news of Castro's passing on Saturday, ordinary Russians have begun bringing flowers to the residency of the Cuban Ambassador in Moscow to offer one last goodbye to the legendary Cuban leader. 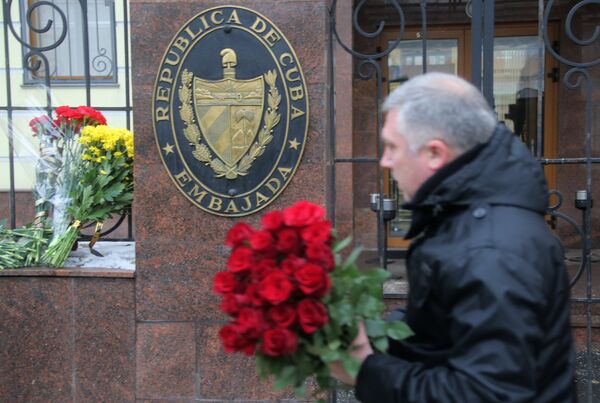 Muscovites have begun bringing flowers to the Cuban Ambassador's residence after hearing the news of Castro's death.
© Sputnik / Vitaly Belousov
/
Go to the mediabank
Newsfeed
0
Access to the chat has been blocked for violating the rules . You will be able to participate again through:∞. If you do not agree with the blocking, please use the feedback form
The discussion is closed. You can participate in the discussion within 24 hours after the publication of the article.
To participate in the discussion
log in or register
loader
Chats
Заголовок открываемого материала