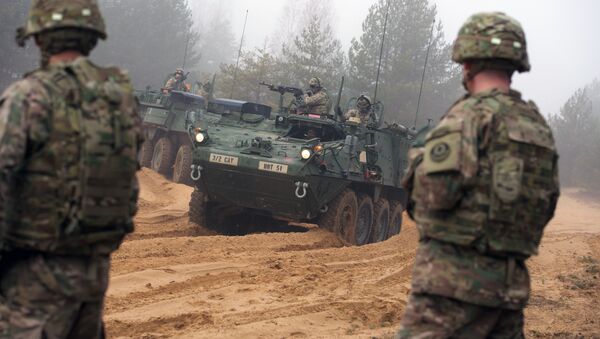 The US leadership needs to reconsider its relations with geopolitical competitors, China and Russia, putting "great power relations" before hegemonic ambitions. Whether one likes it or not, the US unipolar era has come to an end opening the door to a "world of great power balance," former British intelligence chief noted.

While US hawks are propagating a more assertive posture toward China and Russia, Sir Robert John Sawers, the former head of Britain's Secret Intelligence Service, is warning Washington against aggravating tensions with Moscow, Beijing.

"The first foreign policy priority of the next American president will be to work out how to avoid direct conflict with China or Russia. Both countries, in different ways, now challenge US dominance. War between the great powers is once again a possibility. For better or worse, we are returning to a world of great power balance," Sawers emphasized in his op-ed for The Financial Times.

'Strong Evidence': West's Saber-Rattling Against Russia Spells Trouble
The former intelligence chief pointed out that the US' unipolar dominance lasted less than 25 years and has eventually come to an end, eroded by wars and the financial crisis of 2008.

Although the United States still remains by far the most powerful country in the world, "it no longer has global hegemony," Sawers stressed.

He remarked, in addition, that the West's economic dominance has also declined sharply in recent years: the G7 developed economies now contribute only 47 percent of global gross domestic product and things are not getting any better.

To complicate matters even further, the Western democratic model has seemingly lost its former appeal, he underscored.

In light of this "an approach is needed that puts global stability first," the former intelligence chief believes.

"Strong defense is essential. Washington's defense investments were diverted for too long by the demands of the 'war on terror'; they have only recently focused on the need to match Russia and China," he noted.

However, according to Sawers, that does not mean a return to Cold War-style confrontation. There is a better model, he remarked, referring to "the 19th-century Concert of Europe, in which six powers preserved an equilibrium that lasted nearly 100 years."

"What that requires is acceptance of each other's systems of government, however much we may dislike them, and clear limits to hostile action to which all adhere… Co-operative solutions to regional problems would be more achievable if the great powers were not directly undermining one another," he emphasized.

"We cannot afford to stumble into a military conflict between the great powers," Sawers repeated.

There is 'a Path to Normalization in Relations Between US and Russia'
Similar views have been recently voiced by Sawers' compatriot, journalist Rod (Roderick) Liddle in his article for The Spectator entitled "Stop this stupid saber-rattling against Russia."

"Every day sees a ratcheting up of the rhetoric against Russia… Today, when some deranged Tory MP clambers to his feet and demands we start shooting down Russian jets [in Syria], it is evident to everyone that he is not joking, merely idiotic and dangerous," Liddle noted, adding that Western politicians are pushing the world to the brink of yet another global conflict.

"It's not their side that worries me; it's ours," the British journalist stressed.

"This is my worry: we provoke and provoke, we distort the facts in order to suit our agenda, we vilify Putin and his country in a wholly belligerent, one-eyed, manner, ignoring our own misdeeds — in Ukraine, in Syria and Iraq, and with regard to human rights and freedom of speech," Liddle pointed out.

This is Why Obama's Successor Needs to Look at the World From a Different Angle
American foreign policy analysts Dimitri K. Simes, Pratik Chougule and Paul J. Saunders also believe that Washington and its allies should reconsider their foreign policy strategy.

Instead of beating the war drums about the challenge posed by Russia and China to the West, the next American president should establish clear objectives in relations with Moscow and Beijing, the analysts underscored.

"US leaders will need to define vital national interests, with a realistic hierarchy of international priorities. They will need to review the extent to which current policies, including alliances, serve US interests. And they will need to establish clear objectives in relations with rival major powers China and Russia," they stressed in their article for The National Interest.

The foreign policy analysts called attention to the fact that the US leadership contributed a lot to distrust between Washington and its geopolitical competitors, China and Russia. The US-led NATO expansion as well as the Obama administration assertive "Pivot to Asia" policies continues to exacerbate tensions between the global powers.