US 'Made Wrong Diagnosis' for Syria, Their 'Treatment' Made the Patient Die 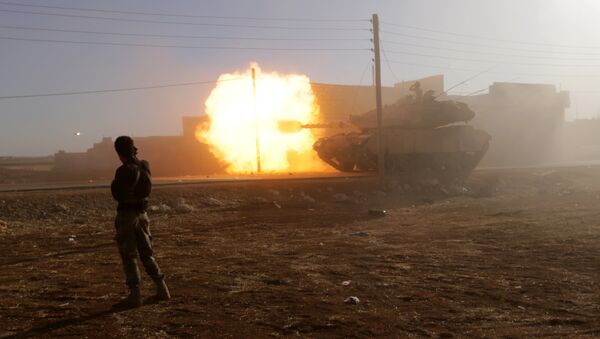 Commenting on the US and European criticism of Russia's aerial operation and humanitarian activities in Syria, Jan Oberg, Director of Sweden-based Transnational Foundation for Peace and Future Research think tank told Radio Sputnik that this "kind of power language does not belong to wanting to get something done there."

Russia in Syria 'Indefinitely': What It is All About
On Monday, European Union (EU) foreign ministers met in Luxembourg to discuss Syrian settlement. They denounced Russia's and Syria's actions however said that they won't consider imposing any additional sanctions on Moscow over its campaign.

EU’s foreign policy chief Federica Mogherini said the ministers might add more Syrians accused of various abuses to the sanctions list, but no EU country raised the idea of imposing sanctions on Russia. 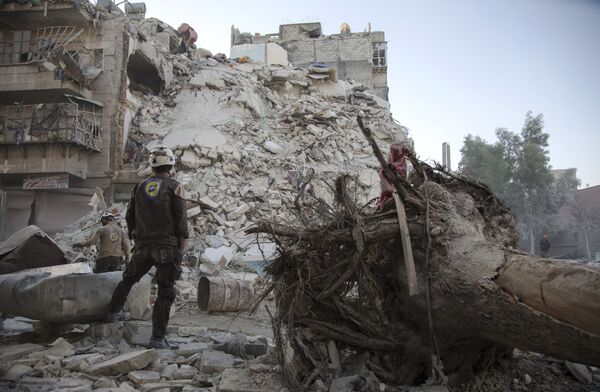 A member of the Syrian Civil Defence, known as the White Helmets, stands amid the rubble of a destroyed building during a rescue operation following reported air strikes in the rebel-held Qatarji neighbourhood of the northern city of Aleppo, on October 17, 2016
© AFP 2022 / KARAM AL-MASRI

"The last five years of Western policies in the Syrian conflict have basically come to nothing except destruction and ever further away from some kind of solution," he told Sputnik.

"The last few weeks of "mistaken bombings", humanitarian convoys and breaking down of Lausanne meeting this Saturday is making the Americans and British decision makers more and more grumpy. However it will only harm Syria's peace process, it will split the EU further, it will make Russia, Iran and China to turn away more from the West. It means their isolation of the West," he further explained.

"It is a kind of power language which does not belong to wanting to get something done," Oberg stated.

The political analyst explained that in the long run, all this confrontation which is also related to Ukraine  is increasing the risk of war between Russia and NATO.

"It is high time to start thinking in a different way about how to deal with this conflict, internal or external conflict whatever we define it as. The diagnosis of Syria was wrong from the beginning and that is where the treatment has made the patient die," he stated.

US Should Have 'at Least Some Moral, Political Credit to Threaten Russia'

Jan Oberg also commented on the accusations of Moscow by the US State Secretary of "committing daily crimes against humanity,” and of Syrian government by the UK Foreign Secretary of the “radicalization” of the so-called "moderates".

"These particular countries are the countries who during the last twenty five years, beginning in Yugoslavia after the falling apart of the Soviet Union and the Warsaw Pact, have done absolutely nothing for the international law, have committed crime all over the place: Afghanistan, Iraq, Libya, Syria, Somalia, you name them," he told Sputnik.

"There is an American expression "to live in an autism". We only look at what we do ourselves and then we tell others what to do. But we don't compare ourselves with what others do. It is like a criminal telling other criminal that you have to go to prison for what you have done. We are in the theater of the absurd. We are no longer talking professional realpolitik," he added.

The expert however noted that there are things which the West did not have to have created.

Confrontation with Russia in Syria Risks Incalculably Serious War With the West
When Gorbachev decided that it was the end of the Soviet Union and dissolved the Warsaw Pact that is when NATO should have done what NATO leaders promised him, he said.

Namely, that NATO would not expand an inch. And that there would not be unified Germany in NATO.

"Now Clinton, the man, decide to expand NATO. And that is where we are today: ten former Warsaw Pact countries are now NATO members," he said.

"What a wonderful Europe we could have created without all these military activities and alliances. It may have made OSCE (Organization for Security and Co-operation in Europe) strong and make the Europeans to have their own United Nations system. There are so many things alternatively that could have been [done] if not militarists have taken the driver's seat for the last twenty five years," he regretted.

"I am old enough to remember the first Cold War and God forbid that we are going to have it again with our children and grandchildren suffering the next 25-30-50 years," Jan Oberg said.

US', NATO's Warmongering Rhetoric 'Signifies the End of Their Empires''

This is Why Russia 'Wins in the Whole of Arab-Muslim World While the West Loses'
The political analyst also commented on Washington's belligerent rhetoric towards Russia and the idea of sanctions over Russia's campaign in Syria.

There is no balance in the world anymore, he said. People used to say that the balance is the way to peace. They talked about the power of balance, about nuclear balance. All these balances have disappeared. And now it is much more risky and unbalanced world.

"I think that the belligerent language comes from something much deeper and namely the thing that the West is getting weaker," he then explained.

"When the West is getting weaker, when you feel that you are beginning to lose power, when the BRICS countries and others are doing things their own way, when Africa is rising and the European economy is going down and all that and when the credibility of Washington's very split policy is evident to everyone then you are beginning to see the dissolution in the future of the US Empire, not of their Republic but of the Empire," he said.

"The people can get very anxious and may be very aggressive when they feel that their time is over. And I think that the time of the US Empire and NATO Empire is and will rather soon be over exactly as the Soviet Union's and the Warsaw Pact's," he finally stated.