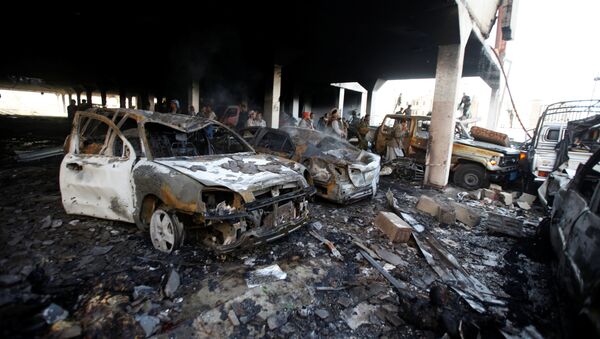 © REUTERS / Khaled Abdullah
Subscribe
Saudi airstrikes targeting a funeral of opposition rebels horrified the world leaving over 200 dead forcing the United States to reconsider their position regarding aid and support to the coalition which has already been blasted by the United Nations for targeting hospitals, civilian infrastructure and children.

The United States has issued an "immediate review" of all aid to the Saudi-led coalition in Yemen after an airstrike killed over 200 people attending a funeral in Yemen. The Saudi coalition has come under fire in the past year even being included temporarily on the United Nation's "child killer" list for their indiscriminate bombing of hospitals, schools, and other civilian infrastructure that has led to mass loss of life among non-combatants.

The White House called for an immediate ceasefire between the Saudi-led coalition and the Houthis in the wake of the attack with US officials describing the incident as "deeply disturbing" despite a string of similar incidents in recent months that have shocked the conscience of the international community.

Among the similar natured attacks was an airstrike on a peaceful protest of hundreds of thousands in the downtown square of the capital of Sanaa roughly one month earlier although that incident led to less loss of life with the bombs mostly careening just outside the protesters.

The Obama administration has also pushed forward an unprecedented round of arm sales not only to Saudi Arabia, the single largest buyer of US advanced weaponry, but also to a number of other Gulf States include Qatar, Kuwait, and the United Arab Emirates — sales that have been met by scorn from some lawmakers and the international community with concerns that these weapons would be turned against civilians and even domestic populations.

"In light of this and other recent incidents, we have initiated an immediate review of our already significantly reduced support to the Saudi-led Coalition and are preapred to adjust our support so as to better align with US principles, values, and interest said US National Security Council spokesman Ned Price.

The National Security Council spokesman went further admonishing Riyadh saying that "US security cooperation with Saudi Arabia is not a blank check."