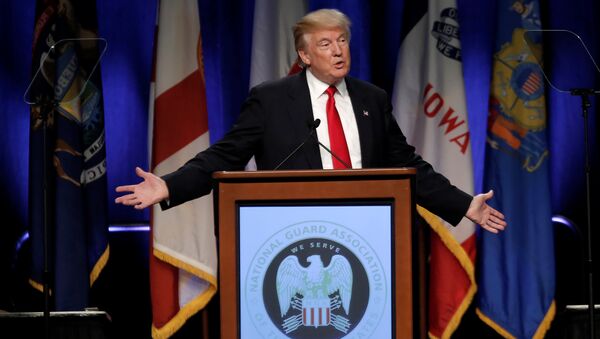 A new LA Times Daily Tracking poll shows that the bombastic Republican nominee has managed to attract support from a growing number of minority voters despite recent attacks and the revival of the Birther controversy this week.

The latest survey conducted by the LA Times of 2,507 respondents nationwide shows 47.7% of voters support Republican nominee versus only 41% who support the former Secretary of State Hillary Clinton with Trump’s poll performance improving by an unprecedented 7.1% over the past 6 days.

Trump’s rise in the polls comes during a rough patch in the Clinton campaign after Hillary collapsed at the 9/11 Memorial ceremony last Saturday reviving questions about her health and fitness to serve as the nation’s commander-in-chief.

The concerns about the former First Lady’s health quickly turned to questions about her honesty and transparency after her campaign provided inconsistent statements regarding her condition including saying she was dehydrated, then claiming pneumonia, and finally Bill Clinton described it as the flu and said she collapses "frequently."

Perhaps the most surprising finding in the polling, and perhaps a reason to be suspicious about the result, is where Donald Trump made up most of the ground during his huge polling surge. On September 10, Trump was polling at only 3.1% among African-American voters, but as of this weekend he has the support of 20% of the black electorate suggesting a major sea change in how the community views him.

Yet the poll result strangely coincides with a period of time when the Clinton campaign looked to smear Trump by claiming that he was sympathetic to white supremacist groups as well as a week driven by the revival of the racist "birther" controversy – a conspiracy theory regarding whether President Obama was really born in the United States that Trump was the lead booster of for years.

Nonetheless, the attempts to smear Trump by using bots pushing a Twitter trend with the name of the former Imperial Grand Wizard of the Ku Klux Klan may have potentially backfired on the Clinton team given its offensive nature and the Republican nominee did say unequivocally this week that President Obama was born in the United States although he did not apologize for pushing the theory.

Other factors that may have contributed to the result were revelations, almost completely without mention by the media (except to call to it "false claim"), that Hillary Clinton’s top advisor Sidney Blumenthal originated the "birther" conspiracy theory during the 2008 election which is evidenced by the fact that the McClatchy news service even sent a reporter to Kenya following a conversation with Blumenthal.

More likely it seems that the driving force behind the shift in the black community’s perception of the two candidates is rooted in Trump’s outreach to black evangelical voters from his interview with Bishop Wayne Jackson on the Impact Network television network – the country’s only gospel channel that focuses directly on the African-American community nationwide.

The Real Clear Politics average of all polls similarly shows a Trump surge with Clinton’s once formidable 8-point lead down to less than one percent well within the margin of error with several polls making up the sample showing the Republican nominee leading albeit by a smaller margin than the LA Times poll.