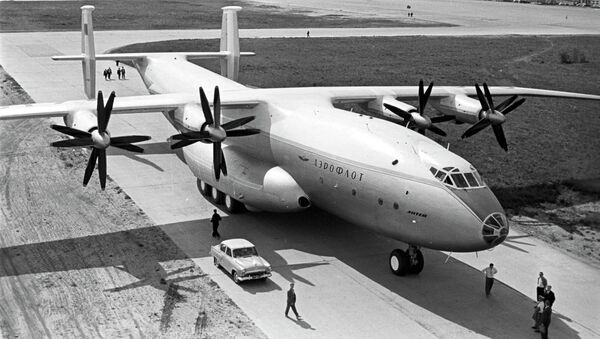 Ilya Tsukanov
All materialsWrite to the author
Ukraine's Antonov, once a legend of global civilian and military aircraft production, is on the verge of collapse. With its cooperative ties with Russia almost completely cut off, the company has completely ceased aircraft production, and is now engaged in selling off its trove of intellectual property to foreign buyers.

This year, the company, which only recently boasted plans to expand on the global aviation market, will not complete even a single aircraft. Andrei Khaustov, the deputy head of the department of perspective developments at the company, admitted as much late last week. The cause of the crisis, the official added, is that the company's stock of available Russian components has completely dried up.

The total halt in production is a massive blow to the aviation giant, which until recently had remained one of only a handful of companies in the world capable of implementing the full cycle of aircraft production – from design to production to comprehensive after-sales support. In its history, which began in 1946, Antonov has developed more than 100 types and modifications of civilian, cargo, military, and specialized aircraft, building over 22,000 planes.

Kiev's Epiphany: Russia Trade Losses Equal to Country's Entire Budget
Among Antonov's most famous creations are the An-124 Ruslan and the An-225 Mriya heavy and super-heavy transport aircraft. The latter is famed for having the largest wingspan of any aircraft in operational use, and for its use to piggyback the Buran, the Soviet Union's answer to the US Space Shuttle program.

Even last year, the company's production figures were dismal, Antonov building only two aircraft – an An-148 regional jet airliner and a stretched fuselage version of the plane, known as the An-158. The company now has ten An-148 and An-158 aircraft on the production floor at various stages of readiness, their completion impossible until the company finds replacements for the estimated 5,400 components previously supplied by Russian companies. 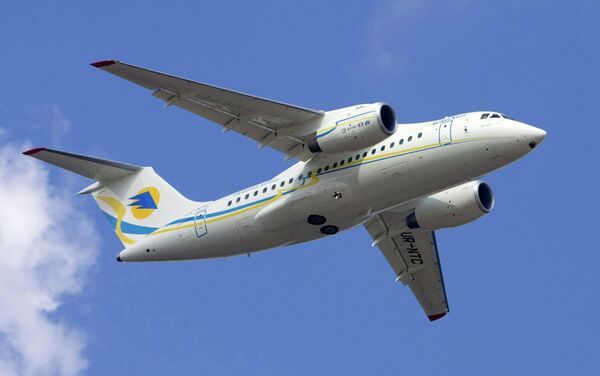 Ukraine Expects $1 Bln Loan From US by End of Month
Antonov President Alexander Kotsuba tried to put a brave face on things, suggesting that US and Canadian companies, including CMC Electronics and Esterline, would be able to replace Russian components, bringing the share of Russian parts in the aircraft from its current 30-40% down to zero. However, Kotsuba admitted that even that would become possible only at the end of 2017.

Nonetheless, the company remains defiant, vowing to eliminate Russian components not only from new planes, but even from many existing aircraft, including the seven heavy transport An-124s operated by Ukraine's Antonov Airlines. The planes are set to have their Russian avionics, brake systems and tires swapped for Ukrainian and Western systems.

After the rift in relations between Kiev and Moscow following the 2014 Maidan putsch, the former Soviet giant, already limping along for most of the post-Soviet period, went into a tailspin. Antonov was forced to break off its joint venture with Russia's United Aircraft Corporation (OAK) by authorities in Kiev, and to terminate the joint Ukrainian-Russian project to build the An-70 military transport plane. After that, Antonov halted its supply of components to Russia's Samara International Aviation Corporation, where the An-140 turboprop airliner used by the Russian Defense Ministry was assembled. 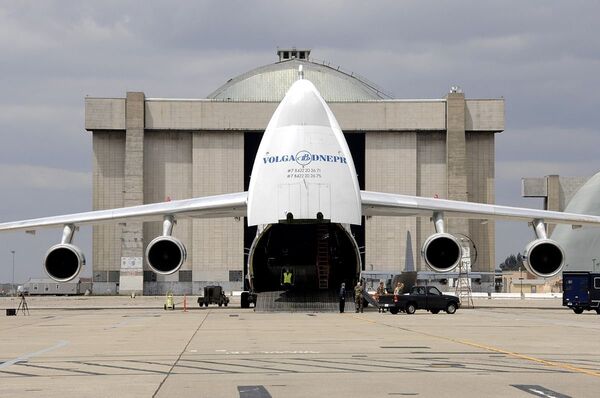 Moscow, waiting patiently for almost two years as Antonov cut one form of cooperation after another, finally resolved to respond this summer. The production of the An-148 regional jetliner, outsourced by Antonov and built at Russia's Voronezh Aircraft Production Association, was stopped.

According to Russian business magazine Expert, OAK, the umbrella company which owns the Voronezh plant, made a conscious decision to continue to continue the production of the An-148 for a long time, despite the fact that the plane is a direct competitor to the Sukhoi Superjet family of regional airliners.

IMF Assistance to Ukraine 'Little More Than Mass Robbery of Its Population'
"The production of An-148 aircraft brought OAK nothing but losses, but the corporation held off on removing the plane from production for a long time for political and social reasons," the magazine noted. "Lately, only the Russian Ministry of Defense had been purchasing these planes, while Russian civilian carriers did not want them, finding their technical characteristics uncompetitive."

Now, Expert warned, "Antonov's management has chosen an unconventional and very dangerous path to ensuring its survival, through the trade of its scientific and technical potential, created in Soviet times, and by attempts to blackmail Russian operators of the An-124 Ruslan strategic airlift aircraft," forcing the latter to shell out cash to receive certification extending the service life of the planes.

Late last month, the company signed a deal with China's Aerospace Industry Corporation to sell the An-225's design characteristics, and to assist China with the serial production of the aircraft. The Chinese company expected to first build a second An-225, and then to organize mass production. 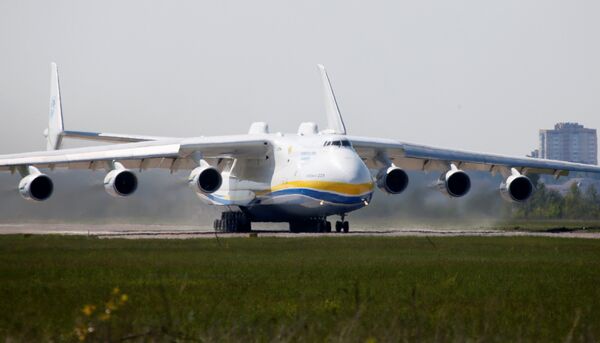 The Antonov An-225 Mriya, the world's biggest aircraft, built in Ukraine during the Soviet era. Today the country's aviation industry is on the verge of collapse.
© REUTERS / Valentyn Ogirenko

While company officials from Antonov have preferred to talk about some form of joint production and a joint intellectual property agreement, the reality, according to Expert, is far more grim. China, the magazine noted, does not need the An-225 for commercial exploitation, with the Ruslan already sufficiently powerful to close this niche.

Revival of Aging Ukrainian Aircraft AN-225 May Serve Chinese Space Program
"But for the rapid deployment of large formations of troops and military equipment, such capacious planes are simply a necessity. The flight range of a Mriya, equipped with a regiment of 2,000 troops and five heavy tanks, is over 2,500 km. This means that with a dozen such aircraft, the PLA would be able to transfer at least one tank battalion or division almost anywhere in Southeast Asia."

"And since the Mriya's production will be organized in China, that country's industry would receive all the necessary expertise and technology to create their own heavy transport aircraft in the future." In this scenario, Expert noted, "it's hardly worth it for Ukraine to expect any serious dividends" from its deal with the Chinese.

"At best, the Chinese valuation of Antonov's intellectual property amounts to several tens of millions of dollars; at worst, Ukraine won't get anything. About 20 years ago, Antonov already attempted a similar joint project with Airbus for the production of the An-7X (a prototype of the An-70). But having received all the necessary design drawings, the Europeans decided to build their own freighter aircraft – the A-400M, which has already entered service in a number of EU countries."

The Ukrainian company's efforts to squeeze money out of Russian operators of the An-124 aren't likely to pan out either. The company has effectively stopped the certification process to extend the life of Ruslans operated by Russia's Volga-Dnepr airline and by the Russian Defense Ministry.

Round Three: Most Ukrainians Believe Country Due for New 'Revolution of Dignity'
The planes have a 50,000 flight hour working life (meaning 10,000 flights or 45 calendar years). But every 4,000 hours, their certification must be renewed by Antonov. The problem, according to Expert, is that "Antonov has failed to carry out this work, or to send experts to carry out technical inspections. Informally, Russian experts are saying that this is being done to pump up the price of certification."

"But they clearly miscalculated," the magazine emphasized. The Russian Defense Ministry has already begun efforts to ensure that its 20 An-124 aircraft will be inspected by OAK subsidiary Ilyushin. Volga-Dnepr has not been so fortunate, and Ukraine has already promised to try to ban their flights abroad.

"Legally speaking, that's extremely difficult to do. Antonov is well aware of this…The maximum they can do is to absolve themselves of responsibility for the technical condition of the aircraft, and to notify aviation administrations of other countries about it. But if Ilyushin is assigned with the obligation to provide technical support for all An-124s in Russian jurisdiction, such a notification by the Ukrainian firm will lose any meaning."