Turkey is 'Pulling US' Chestnuts Out of the Fire in Syria' 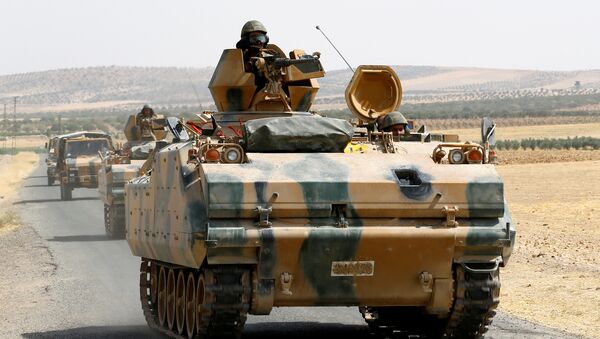 © REUTERS / Umit Bektas
Subscribe
Washington has endorsed Turkey's "Euphrates Shield" to manipulate Ankara into pulling the US' chestnuts out of the fire in Syria, experts note, adding that Turkish President Erdogan may seek further rapprochement with Russia, Iran and China.

Washington has endorsed Ankara's "Euphrates Shield" military operation not only to mend its ties with the Turkish leadership but to meet its own geostrategic objectives in northern Syria, Jean Perier, an independent researcher and expert on Middle Eastern affairs writes.

"As for the strategic objective Washington is pursuing by helping Ankara, it can be briefly described as the maintenance of the balance of powers in the Middle East. American think tanks are keen to keep the two leading coalitions that are fighting ISIS [Daesh] pitted against each other, just like it does with political forces in Iraq, Syria and Turkey itself," Perier notes in his article for New Eastern Outlook.

Operation Euphrates Shield: A Trap for Turkey or 'Endless War' for Syria?
According to the expert, Washington is running certain risks. On the one hand, it is possible that Turkey could "ignore the influence of NATO commanders," while trying to accomplish its own military tasks on the ground.

On the other hand, the situation in Syria is complicated by the fact that a large number of players are currently involved in the war.

Thus far, it is important in the eyes of Washington "to keep Turkish President Recep Tayyip Erdogan on a tight leash, by instilling fear in his head that both the situation in northern Syria and within Turkey itself may deteriorate quickly," Perier suggests.

For his part, Erdogan is pursuing two major objectives by launching the "Euphrates Shield" operation in northern Syria.

Situation on the Ground in Syria 'Has Begun to Resemble a Global War'
Indeed, the establishment of an independent Kurdish entity along the Syrian-Turkish border may encourage the Turkish Kurds to intensify their struggle for sovereignty.

At the same time, Ankara needs a "small and victorious war" to calm tensions simmering between the Turkish military and the government after the failed coup attempt.

"[Turkey's] military operation in Syria is playing into Erdogan's hands not only because it could solve the Kurdish issue, but because of the complicated political situation in Turkey: the military are interfering in politics and in this situation the best choice is to send them to war. Interestingly enough, the Turkish invasion of Syria was timed to coincide with the 500th anniversary of the beginning of the Battle of Marj Dabiq [between the Ottoman Empire and the Mamluk Sultanate] which took place near the city of Aleppo in 1516," Balmasov told Svobodnaya Pressa.

"Americans are still seeking to weaken the Assad regime as much as possible," the Russian expert underscored, stressing that this is Washington's major goal so far.

According to Balmasov, all the "pseudo-coalitions" the US have formed in the region are temporary ones. He added that the Turks should stop deluding themselves regarding Washington's genuine intentions: Ankara's role in the US-Turkish alliance is to pull the US' chestnuts out of the fire.

Sectarian Bloodbath: Washington Has Opened Pandora's Box in Syria
In any event, Ankara's involvement in the Syrian war will exacerbate the conflict, facilitating the country's fragmentation, the Russian expert believes. He added that the chaos on the ground plays into Washington's hands.

However, Anton Mardasov of Svobodnaya Pressa notes that the clouds which are gathering on Damascus' horizon have a silver lining.

Mardasov suggests that Turkey's incursion could have been coordinated with both Moscow and Tehran.

Turkey has shifted its focus from Damascus to Daesh and the Kurdish militants, the journalist notes. He calls attention to the fact that Ankara is now not demanding that Syrian President Bashar al-Assad should step down.

Furthermore, according to the journalist, by launching "Euphrates Shield" Turkey has blocked the creation of the so-called Federation of Northern Syria — Rojava declared by the Syrian Kurdish Democratic Union Party (PYD) back in March 2016. The Kurdish entity was denounced by Damascus as illegitimate.

Turkey's "Euphrates Shield" campaign appears to be a "multi-dimensional" operation: Ankara is walking a tightrope between its regional allies and global partners.

Perier assumes that Erdogan may bolster cooperation with Russia, Iran and China to solve the Syrian issue, however, "should it do so, the White House would seek to replace him just as they have done in so many other nations."

000000
Popular comments
"Mardasov suggests that Turkey's incursion could have been coordinated with both Moscow and Tehran." If that's true, then what is the difference between them and the West??? Publicly condemning it, but privately supporting it???!!! Just another two face liar then??? Don't we have plenty of those already???!!! Why are you spewing out such filth Anton Mardasov???!!!