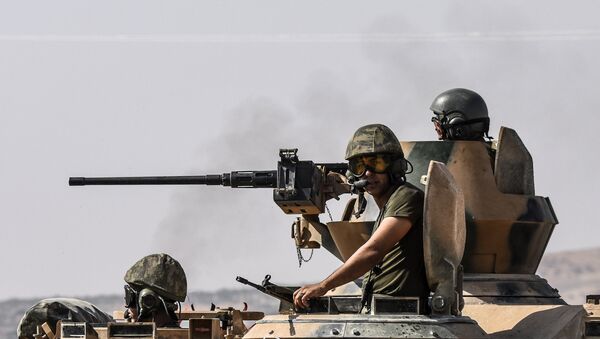 © AFP 2021 / BULENT KILIC
Subscribe
Turkey's military operation in northern Syria could become a trap for Ankara if its campaign turns into a long-term engagement, defense analyst Leonid Nersisyan asserted, adding that even a brief offensive will not pay off. In addition, it will not help to speed up the peace process in the war-torn Arab country.

"The duration of Turkey's campaign is the most important issue. If Operation Euphrates Shield becomes protracted and drags on for more than two months, it will necessarily lead to major losses for the Turkish military that has never missed an opportunity to strike at Kurdish forces in Syria. The People's Protection Units (YPG) has already proved that they are capable of offering a battle," he said.

On August 24, Ankara sent its warplanes, tanks and special forces assisted by the Free Syrian Army across the border to ostensibly free the town of Jarablus and prevent the Kurds from advancing further West.

Key Reason Behind Turkey's Ground Operation in Syria
Interestingly, both Turkey and the YPG are Washington's key allies in the region.

This is why the Turkish military and Kurdish militias have largely refrained from large-scale armed hostilities, although occasional fighting has taken place. The United States has pressured both sides to focus on fighting Daesh and not each other, urging the Kurds to move east of the Euphrates.
This standoff could escalate if Turkey does not pull its forces out of Syria, the analyst observed.

"If rumors are to be trusted and the US is not providing air cover for the Turkish Armed Forces, the situation could become extremely complicated for Ankara. Don't forget about the de facto civil war with the Kurdistan Workers' Party (PKK) in Turkey," he added. 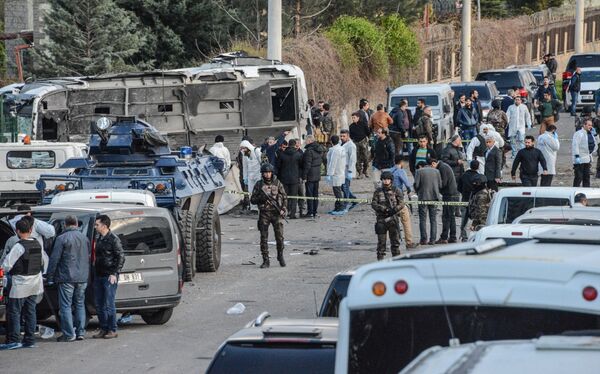 Last year, Turkish authorities launched a military operation in the southeastern regions of the country, populated mostly by the Kurds. In response, Kurdish militants carried out terrorist attacks in the country.

Russian Carrier-Based Warplanes to Unleash 'Ultra Precision' Strikes on Daesh
Nersisyan is also convinced that even a short-term military engagement will not pay off in the long run. "The task aimed at preventing the YPG from taking the border regions under control will ultimately fail," he said, adding that Turkey's operation will most likely boost the PKK's recruitment and rearmament efforts.

In addition, Turkey's military adventure in northern Syria does not help to solve the years-long conflict that has claimed more than 280,000, displaced millions and sparked a major refugee crisis in Europe.

"The conflict is becoming increasingly protracted. Not a single party to the war is capable of conducting successful large-scale operations. This is all due to the endless stream of fighters, weapons and money from dozens of stakeholders pursuing their own interests in Syria," he noted.

Unless those embroiled in the Syrian crisis understand this, the Syrian war could go on "forever," he added.

Operation Euphrates Shield is "expanding," the media outlet noted. The Free Syrian Army assisted by Turkish tanks, artillery and warplanes has advanced to the west of the border town of Jarablus. The rebels have switched the direction after an agreement to temporarily halt fighting was reached with Kurdish militias stationed in Manbij.

In other words, "the Turkish operation in Syria has triggered more fighting in the entire western Syria, including the provinces of Aleppo, Idlib and Hama," the media outlet noted.

000000
Popular comments
It's not Turkey's military operation in northern Syria, or even ATO, it's just another terrorist operation, no different from ISIS, or so called US coalition. Turkey has as many terrorists on their territory, as anyone else, probably a lot more, since most of them get into Syria through Turkey! And if it's OK to violate Syria's border and sovereignty for a "good" cause, then why not Turkey's border and sovereignty???!!! Everybody should just invade Turkey and destroy all terrorists on their territory, before they get into Syria, and if Turkey doesn't like it, then who cares!!! They never bothered to ask Syria, or even Iraq for that matter, before doing the same thing!!!