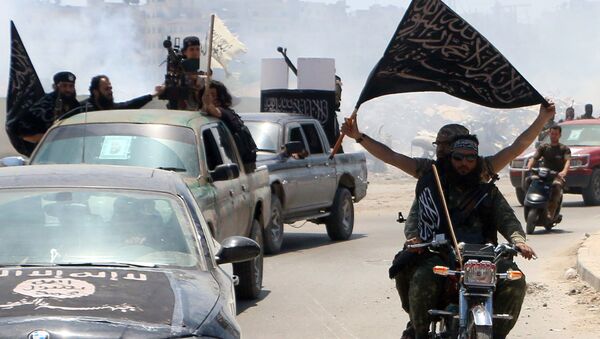 Al-Nusra Front terrorists are still getting reinforcements though the Turkish border, a Russian diplomat said.

MOSCOW (Sputnik) — Syrian opposition and the Jabhat Fatah Al-Sham, formerly known as al-Nusra Front, keep receiving enforcements through the border with Turkey, Ilya Rogachev, the head of the Department for New Challenges and Threats (DNCT) at the Russian Foreign Ministry, said Friday.

"We see that the opposition in general and Jabhat Fatah Al-Sham in particular keep receiving enforcements through the Syrian-Turkish border… This and other issues create uncertainty in the relations with the Americans," Rogachev told RIA Novosti.

He added that Jabhat Fatah Al-Sham, banned in Russia, is constantly maneuvering, takes in new opposition forces, makes new coalitions to blend in with the so-called moderate opposition.

The Russia-US dialogue on countering terrorism is based on the issue of distinguishing between rebel forces and extremists in Syria, Rogachev said.

"Our cooperation with the US in the field of counterterrorism in relation to the situation in Syria is now tied to the situation in northern Syria and is primarily associated with a specific terrorist organization, which we are used to calling al-Nusra Front… and the problem of distinguishing it from the opposition," the diplomat told RIA Novosti.

According to Rogachev, Russia’s US partners have long promised to separate the so-called moderate opposition groups from terrorists.

"And have not come to this yet," he said.

Russia to Resume, Strengthen Counter-Terrorism Dialogue With Turkey
Russia will resume and strengthen its counter-terrorism dialogue with Turkey, the diplomat said.

"The political decisions have been made and we, of course, should, and we definitely will relaunch and then develop and strengthen counter-terrorism dialogue that we had with Turkey some time ago," Rogachev told RIA Novosti.

"Obviously, we have certain expectations and hopes related to the soon relaunch of this dialogue, we hope that the Turkish side feels the same," he added.

Syria has been mired in civil war since 2011, with government forces loyal to President Bashar Assad fighting numerous opposition factions and extremist groups. On February 27, a US-Russia brokered ceasefire came into force in Syria. Terrorist groups, which maintain a heavy presence in Aleppo, are not part of the deal.
Newsfeed
0
Access to the chat has been blocked for violating the rules . You will be able to participate again through:∞. If you do not agree with the blocking, please use the feedback form
The discussion is closed. You can participate in the discussion within 24 hours after the publication of the article.
To participate in the discussion
log in or register
loader
Chats
Заголовок открываемого материала