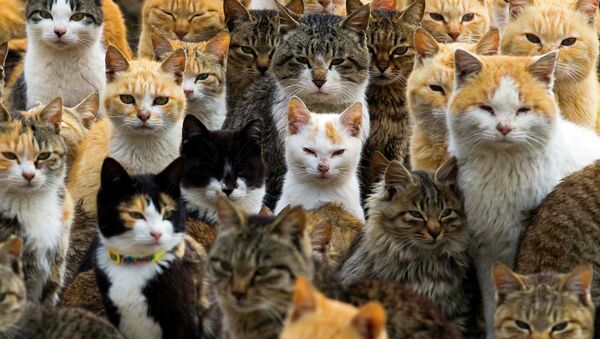 © REUTERS / Thomas Peter
Subscribe
A Swedish couple in Halland County, who had earlier been banned by the county council from owning animals, have been found to be harboring no fewer than 100 felines.

Do You Meow Me? Scientists Close to Understanding Cats' 'Language'
The couple, which reside in Laholm Municipality in southern Sweden, were first scrutinized by the authorities in 2009, following anonymous complaints from animal rights activists. The local council ruled that the cat-loving couple could not own more than nine adult cats. This summer, the ban was extended to an overall prohibition as one of the cats had to be euthanized.

However, when animal protection officers paid the notorious cat-lovers a visit, the ban was found to have been broken by a wide margin, local newspaper Hallandsposten reported.

"Around 100 cats were discovered at the premises," animal welfare officer Sara Olsson told regional newspaper Hallandsposten. "The county council has never before taken care of so many cats," she said.

Thor vs Santa: Lightning Strike Leaves Hundreds of Norwegian Reindeer Dead
The majority of the felines owned by the couple were stray cats taken from the streets and were never castrated, which is why they multiplied all the time. Now, most of them have been taken into custody by animal protection officials.

"The couple had basically good intentions, but it's sad how they let the cats breed at liberty. It would have been okay with nine cats, which you are allowed to own without permission from the county officials, but a hundred is way too many. To take proper care of so many cats would take several people working full-time," Olsson said.

Ten cats managed to flee during the raid, while 90 were taken into custody and are to be examined by veterinarians to assess their health and future.

Owner of the ‘Cat Who Adopted a Monkey’ Reveals How They Live Together
"Once the veterinarians have assessed the cats in full, we will decide where they belong. If some of them turn out to be wild or sick, they will probably be euthanized. But if they are healthy and manageable, they will be placed in another home," Olsson said, as quoted by the tabloid newspaper Expressen.

Curiously, this is not the first time illicit pet-lovers from the little town of Laholm have made headlines. Last December, two local Swedish women were banned from owning animals as well, after pet authorities found out they had treated their cats like babies. They had kept them strapped to highchairs and breastfed them, Hallandsposten reported.