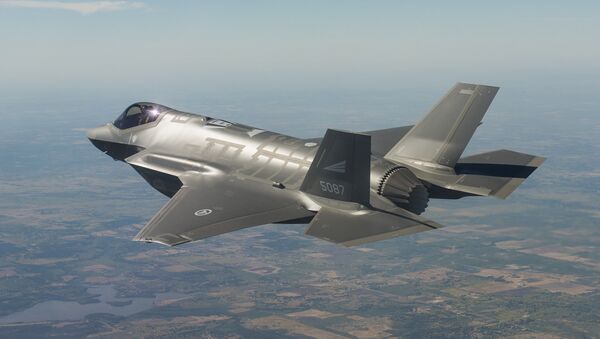 While two variants of the F-35 were declared combat-ready earlier this month, the weapons testers at the Pentagon doubt that the troubled aircraft will meet its full capabilities by the program’s scheduled end date in 2018.

Even after being declared combat-ready earlier this month, new reports documenting the F-35 Joint Strike fighter’s problems continue to crop up. The aircraft’s ejection seat has been deemed dangerous, and a "green glow" problem with the helmet is blinding pilots and preventing the Navy from declaring its variant to be at initial operating capability (IOC).

Adding to complications is a new memo from Michael Gilmore, the US Defense Department’s director of operational testing and evaluation. While the development phase is scheduled to officially end in 2018, the F-35 program is at “substantial risk” of not meeting the requirements.

"In fact, the program is actually not on a path towards success, but instead on a path towards failing to deliver the full Block 3F [software] capabilities, for which the department is paying almost USD400 billion by the scheduled end of system development and demonstration [SDD] in 2018," reads the memo, obtained by IHS Jane’s.

The software referenced is required to provide the aircraft with its full potential.

In addition, all three F-35 variants "are at risk of not having a functioning and accurate gun" due to "significant deficiencies discovered during initial testing."

"Flight testing is making progress but has fallen behind the planned rate."

Speaking to reporters in Singapore on Wednesday, US Air Force Secretary Deborah James pointed out that "combat-ready" does not necessarily mean that the aircraft is 100% complete, a point that is becoming increasingly obvious.

"[The F-35 has] reached the point of initial combat capability, so that’s what we said we were going to have by now and we’ve got it," she said. "But ‘initial’ means initial and over the next several years it’s going to continue to develop, and the word ‘develop’ is an important word too."

The F-35 project, beleaguered from its inception, is expected to cost up to $1.5 trillion over the next 55 years, making it the most expensive defense program in history.