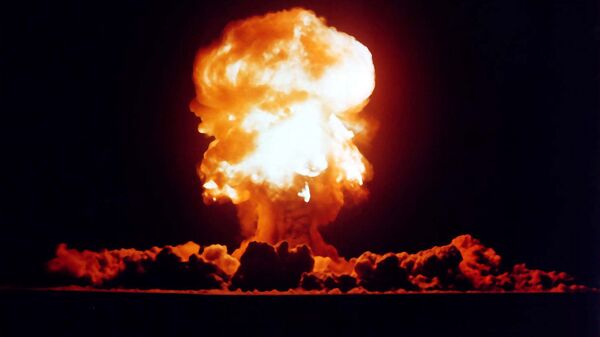 Since the creation of the atomic bomb, humanity has had many close calls to nuclear armageddon, some more publicized than others. A new study shows that one close call involved a 1967 solar storm that nearly caused the US to launch nuclear missiles against the Soviet Union.

The idea of the US Air Force jumping the gun on nuclear war already holds a place in popular culture thanks, in part, to the movies Failsafe and Dr. Strangelove. In the latter Kubrick classic, a paranoid general, determinedly loyal pilots, the appropriately ominous Doomsday machine, and male libido all made for the most memorable comedy about nuclear destruction ever made.

In both movies, the crisis was not averted.

Three years after the release of Dr. Strangelove, the Pentagon placed nuclear-armed bombers on “ready to launch” status because of a solar flare.

According to a new paper authored by Delores Knipp at the University of Colorado at Boulder, and published in the journal Space Weather, the incident occurred May 23, 1967. Three of the United States’ early warning radar installations were suddenly jammed. While the cause was a series of solar bursts, US military officials worried it was the Soviets launching a first-strike nuclear attack.

"There were a series of bursts from the sun," Knipp told CBS News. "The second one started to bring down or severely degrade the kind of communications SAC (Strategic Air Command) would use communicating with its aircraft."

Out of precaution, long-range nuclear bombers already in the air were upgraded to "ready to launch" status and Strategic Air Command prepared to deploy additional bombers.

Thankfully, the nuclear-equipped warplanes were told to stand down, after a team of “space weather” forecasters with NORAD, recognized the true cause of the radar mishap, and alerted Strategic Command.

"So therein lies that little bit of uncertainty in terms of were we on the verge or were cooler heads prevailing all along?" Knipp said. "And that is not something that I or maybe even my co-authors had privy to. What we do know is that the aircraft did not launch."

The crisis was averted, and the incident led to both the United States and Soviet Union funneling more money into their space weather systems.

"As a result of this near-incident, the need to incorporate real-time space weather information into the Air Force decision-making process was made obvious to many, and several major efforts were undertaken to greatly improve the operational capability of the AWS Space Environmental Support System," the study says.

Nuclear annihilation by a deranged general worried about having his bodily fluids stolen sounds fictional, but no more so than that a crisis becomes averted by meteorologists studying the sky.