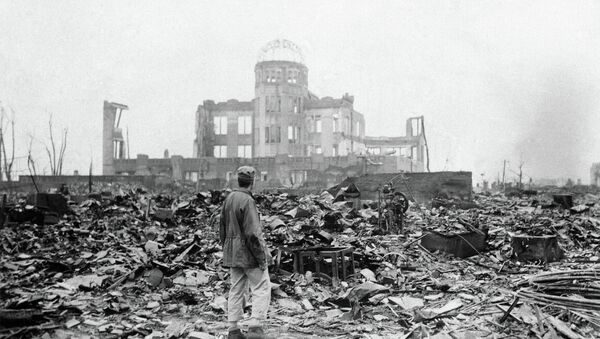 Contrary to a popular assertion that nuclear bombs used on civilians at Hiroshima and Nagasaki were necessary to end World War II, US government documents have indicated that the atomic-bomb atrocities were "test blasts" to "justify" weapons development expense.

Obama’s Offering of Largest Military Aid Package Ever Is Not Enough for Israel
On Tuesday, the 71st anniversary of the US atomic bombing of Nagasaki, a massacre just three days after the annihilation of some 146,000 people in Hiroshima, the White House has again refused to issue an apology to the people of Japan for what some historians call an act of genocide.

Many in the United States believe that, despite the carnage, the use of the weapons was a necessary evil to bring about a quick end to World War II.

Recently, the Obama Administration has set about to increase and make more usable the US nuclear weapon stockpile, budgeting some $1 trillion over the next 30 years toward "nuclear modernization," while Republican presidential candidate Donald Trump states blandly, "why can’t we use them?"

To mark the anniversary of the Nagasaki attack, Loud & Clear’s Brian Becker sat down with Kevin Kamps, an activist with the radioactive watchdog organization Beyond Nuclear.

​Why does the White House refuse to apologize and why is it upgrading nuclear weapons?

"It is a very dangerous time that we are in with these upgrades. The US is upgrading its nuclear arsenal at a cost of $1 trillion over the next 30 years, under the Obama Administration, from someone who, in Prague, who said in 2009, that we need to get rid of these things," stated Kamps.

"One of the historic failures to live up to an opportunity was when Obama visited Hiroshima and talked about the horror of the nuclear bomb — which was good — but the thing he left out, incredibly enough, was the impact of the radioactivity on people from the bombs," said the activist. "He talked about the blast and the fire, but he didn’t mention the radioactivity, which is a huge component of a nuclear weapons, and is why those who survive the bombing are still dying from the bombing to this day, because they have fatal cancers and diseases, including genetic damage."

"There are huge opportunities to try to abolish these things and learn those lessons that are being missed," stated Kamps.

Why was the second bomb dropped in Nagasaki after the horror of Hiroshima?

"The death toll was measured in the tens of thousands of lives lost in the instant of being vaporized at ground zero," said Kamps. "The reason why the [second] bomb was dropped, three days later, was that the first bomb was a uranium bomb and they knew that it was going to work because they had tested it before they dropped it on Hiroshima, killing 100,000 people instantly. The second bomb was a plutonium bomb, a more complicated bomb, and they had to test it to determine if it would really work."

"The US did test the bomb Trinity in New Mexico a few weeks earlier, and it did work in New Mexico, and it did work in Nagasaki, and these were tests actually," said the activist. "An expert actually got his hands on the primary documents from the US government for the committee that was responsible for determining the targets for these bombs, and they spoke in these terms that these were 'test blasts.'"

"Later the Department of Energy provided a list of the test blasts that they had done," said Kamps. "What were the first three? Trinity, Hiroshima, and Nagasaki, and when he called attention to this they quickly changed the documents so that they did not list Hiroshima and Nagasaki as test blasts. That’s what they were."

"The US had spent billions of dollars of 1940s money on these projects, they had spent all of this money, and in their mind they had to justify the expenditure."