NATO' Future: 'Era of Free-Riding' is Coming to an End for Europe 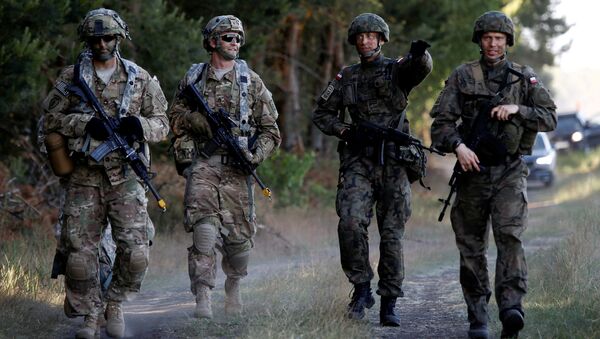 The current debate in the US Presidential campaign over the efficiency of NATO and the degree to which Washington will remain committed to the defense of its allies has caused a heated discussion in the US media on whether America's NATO allies are shouldering enough of their financial and military responsibilities.

Washington Grows More Reliant on Allies as Military Advantage Shrinks
NATO has become a hot issue in the US presidential campaign: in his recent interview with The New York Times Republican nominee Donald Trump said that “we have many NATO members that aren’t paying their bills” and has even suggested that coming to the aid of the Baltic states, if “attacked” by Russia, would depend on whether those states have “fulfilled their obligations” to the US.

Meanwhile, Democratic nominee Hillary Clinton has called NATO “the most successful alliance in history,” and her campaign said that that Trump’s remarks to The New York Times showed that he is “temperamentally unfit and fundamentally ill-prepared to be our commander in chief.”

The debate has caused a heated discussion in the US media on whether America's NATO allies are shouldering enough of their financial and military responsibilities and the degree to which Washington should remain committed to the defense of its allies.

Much discussion has been with regard to Article 5 of the 1949 Washington Treaty creating the alliance, “that an armed attack against one or more of them in Europe or North America shall be considered an attack against them all.”

“This bedrock guarantee has served as the basis for deterring any outside power from contemplated a military assault on any part of the Euro-Atlantic community, by making the assertion that US national security is indissolubly linked to that of its NATO partners in other parts of North America and across the Atlantic on the European continent,” Nikolas K. Gvosdev, the incoming Jerome E. Levy Chair of Economic Geography and National Security at the US Naval War College explains in his article for The National Interest magazine.

Clinton Presidency Would Likely Take Hawkish ‘Cold War’ Stance With Russia
However, according to former US diplomat David Taylor Jones, despite “the holy writ status attributed to Article 5 of the Washington Treaty, laying out the parameters of response to an attack on a NATO member, the specific required responses by other NATO members are far from defined.”

“Bluntly, however, there is no Article 5 requirement for other NATO members to do anything. It requires no action to accept that an “attack against one or more of them…shall be considered an attack against them all,” he writes in his article for the Canada-based newspaper The Suburban.

“But such recognition makes no demands on individual members. Indeed, each “will assist the Party of Parties so attacked by taking…such action as it deems necessary…” But what action? Perhaps stiff notes of protest? Denunciation in the UN Security Council (as Article 5 does require an attack to be “immediately…reported.”)? Full combat response against invaders up to and including nuclear weapons? Or no action at all?” he wonders.

Hence both political analysts suggest that Europe, in fact, should take more active role in NATO.

“This can be a particularly dangerous state of affairs moving forward, when the willingness of NATO members to stand by their Article 5 commitment is being questioned and debates over whether members are “free riding” become more rancorous,” Gvozdev says.

NATO Serves to 'Promote Washington's Interests'
David Taylor Jones explains why Europe has been so inactive.

“The unspoken European fear was not that the United States would abandon them, but that we preferred to fight any Soviet attack with convention forces and/or nuclear weapons on European territory,” reads his article.

The result, he suggests, would be a “burned spot between two green spots” (the USA and USSR).

“Europeans obviously preferred the obverse: tertiary quality conventional forces sufficient only to determine that the Soviet attack was real/serious but followed by rapid US nuclear attack against the Soviets (and implicitly a Soviet response against the USA). Thus “a green spot between two burned spots.”

NATO allies seem all too satisfied with doing as little as possible for their own defense, he says, adding that after all, “Uncle Sam” will do it.

However both experts now say that Europe is quite capable of doing much more, and a “reality check would be a useful exercise.”

The view is being echoed by the US-based online political magazine Politico:

“The difference between 1949 and [today] is that present-day Europe is more than capable of addressing today’s threat, without American assistance or supervision,” it quotes military historian and veteran Andrew Bacevich as arguing persuasively.

“Collectively, the Europeans don’t need US troops or dollars,” he said.

Hence the magazine suggests that the US “should commit to winding down its influence and contribution to NATO over the next decade.”

It however notes that this “does not mean that the US must leave the alliance altogether.”

And once again quotes Bacevich:

“Only if Washington makes it clear that the era of free-riding has ended will Europe grow up.” But grow up it must, as maintaining overwhelming US responsibility for NATO is neither needed by Europe nor helpful to us. It would serve both continents well if Europe learned to better tend to its own defense.”