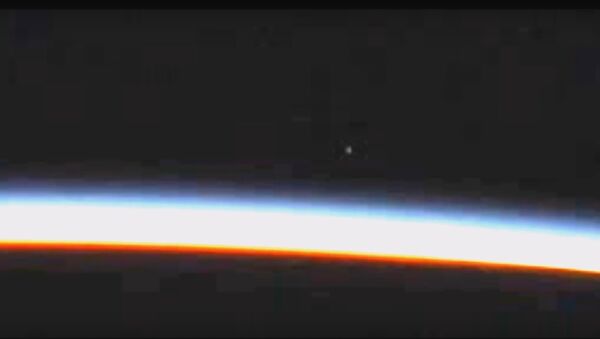 NASA has once again sparked an alien controversy after it cut off live streaming video from the International Space Station (ISS) earlier this month, once cameras spotted a bizarre unidentified flying object approaching the Earth.

Are We Alone? ISS Video Shows ‘Fireball-Like UFO Streaking Through Space’
But the mysterious object made it to Internet alien fans after the footage was uploaded on YouTube by a user nicknamed Streetcap1, presenting themselves as UFO hunter and conspiracy theorist.

Within a week since its emergence on the web on July 9, the video has scored over 2.3 million views. The popularity of the footage has dragged attention of a number of media outlets that questioned NASA if they were trying to conceal the existence of aliens from humanity by cutting off streaming video.

UFO: Top 5 Mysterious Subs That Boggled the Mind
"The feed in question is the High Definition Earth Viewing [HDEV] experiment. Anytime the ISS has a signal that feed is sending down video," the agency spokesperson said to Popular Mechanics, adding that at the time the signal was lost and the video stream went dark.

HDEV is fully automated and cannot be turned off at a request, meaning that alien existence – or invasion — couldn’t be concealed from a human’s eye.

The agency speaker stressed that the ISS loses direct connection with Earth regularly.  The station orbits the planet 16 times a day, occasionally getting out of reach of Tracking and Data Relay Satellites (TDRS) that are used to send and receive video.

"We used a space-based data relay network. It gives us a very good coverage area, but you do lose signal occasionally—anywhere from a couple of seconds to a couple of minutes. It varies from day to day."

However, many internet users didn’t believe in agency explanation.

“With thousands of satellites NASA has deployed over decades, there would still be "blind spots" in communications with the ISS, with human lives aboard?” a user named Furd Helmer argued. “How can [NASA] claim to be on the cutting edge of space technology, [if] it can [not] solve the problem of ‘blind spots’?”

Mysterious UFO Spotted Over Siberia Causes Social Media Stir
Many pointed to the extremely low quality of the footage, suggesting NASA could make it bad intentionally to conceal something from people.

“Why does every UFO footage look like its recorded with an original game-boy camera?”﻿ a user named Andrew Bergk asked.

Finally, the skeptics said that if aliens existed, they should have been captured on some device by this time.

“Funny how the UFO industry, cuz that's what it is, has died due to the advent of cellphones. Where are the thousands of videos of spaceships and aliens?” a user called Nunsuch said.

Still, the truth is out there!