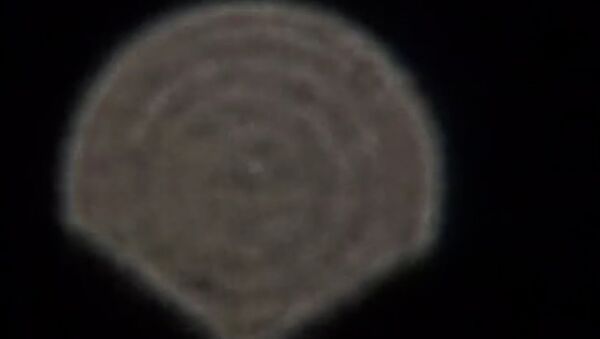 © Photo : YouTube/Tatyana Sergeyeva
Subscribe
A viral video footage of a mysterious object “flouncing” in the night sky over a small Siberian town caused social media frenzy, making many to believe it was UFO.
The footage, made on June 28 by two residents of the town of Cherlak in Russia’s Omsk Region, depicts a bright object that hectically moves across the dark sky, permanently changing its shape. Soon after the video was uploaded on YouTube, it went viral, making over 50,000 hits.

Peter Mironov, 22, the author of the video, said the object looked like “kind of flame” that was constantly “flouncing” in the air.

Are We Alone? ISS Video Shows ‘Fireball-Like UFO Streaking Through Space’
“No, I’m not shaking the camera, I’m holding it firm. It is cone-shaped, and we’re not seeing this with our eyes,” Mironov’s voice heard in the video, states.

Internet investigators suggested that the object could be a “hot air balloon”or an optical illusion caused by defects of the camera’s lens.

Skeptics claimed that the video was a fake aimed at attracting public attention. The allegation is based on the fact that Tatiana Kopylova, 23, who uploaded the footage on her YouTube page, is a passionate fan of UFOs and has a lot of similar videos on her account.

Siberian astronomer Vladimir Krupko was not as critical of the two UFO seekers, saying they could see a mysterious object in the night sky. However, he added, it barely was a UFO.

ISS UFO Sighting: Is It a Bird? Is It a Plane? Is It a Mark on the Window?
“I’m sure that this was a bright star filmed close-up. That is why it appeared as some strange cone-shaped or diamond shaped object,” the astronomer told OmskZdes news outlet. “The fact that they filmed the video using ‘close-up’ doesn’t allow me to say which part of the sky was filmed.”

However, Scott C. Waring, a UFO hunter and a prolific blogger, claimed that the Siberian flying object was a UFO and was also seen in other parts of the world, including Taiwan, China and Israel.

“No, this is not a planet or star, it is a UFO. I personally have seen it over Taiwan,” the blogger said, referring to another piece of footage filmed on July 29, 2013.

This is not the first time UFOs have been observed in Omsk region. The first reported instance occurred there over 50 years ago, OmskZdes reported. The most notable incident, however, was registered in 1991 in the village of Chukreevka, when locals reported of a fire ball floating over the streets. The object eventually hit the ground and exploded. Ufologists suggested at the time that the ball was an aliens’ spaceship. Experts found a large amount of chemical elements at the blast site, including rare-earth metals.

000000
Popular comments
It is an aluminized Mylar balloon floating away from someone's birthday party.

support
3 July 2016, 09:28 GMT
000000
Russia testing new propulsion? remember all the world SCARED TO DEATH over some lights? It was Russia's BULAVA. So be careful some new thing to bypass air defenses and ground defenses? I remember even Israel saw Russian tests and the prayers at the wall, for the end of times, BEGAN. All Russia had to do was break open the gates.... And that would had sent all Catholic church to meet the new CHRIST.. I'M serious. Some become PARANOID on those topics. Nothing against religious believes. BUT , this could had happened then. I don't discard anything. Seen too much in little time.
cast235
3 July 2016, 09:36 GMT
000000
Newsfeed
0
New firstOld first
loader
LIVE
Заголовок открываемого материала
Access to the chat has been blocked for violating the rules . You will be able to participate again through:∞. If you do not agree with the blocking, please use the feedback form
The discussion is closed. You can participate in the discussion within 24 hours after the publication of the article.
To participate in the discussion
log in or register
loader
Chats
Заголовок открываемого материала
Worldwide
InternationalEnglishEnglishMundoEspañolSpanish
Europe
DeutschlandDeutschGermanFranceFrançaisFrenchΕλλάδαΕλληνικάGreekItaliaItalianoItalianČeská republikaČeštinaCzechPolskaPolskiPolishСрбиjаСрпскиSerbianLatvijaLatviešuLatvianLietuvaLietuviųLithuanianMoldovaMoldoveneascăMoldavianБеларусьБеларускiBelarusian
Transcaucasia
ԱրմենիաՀայերենArmenianАҧсныАҧсышәалаAbkhazХуссар ИрыстонИронауОssetianსაქართველოქართულიGeorgianAzərbaycanАzərbaycancaAzerbaijani
Middle East
Sputnik عربيArabicArabicTürkiyeTürkçeTurkishSputnik ایرانPersianPersianSputnik افغانستانDariDari
Central Asia
ҚазақстанҚазақ тіліKazakhКыргызстанКыргызчаKyrgyzOʻzbekistonЎзбекчаUzbekТоҷикистонТоҷикӣTajik
East & Southeast Asia
Việt NamTiếng ViệtVietnamese日本日本語Japanese中国中文Chinese
South America
BrasilPortuguêsPortuguese
NewsfeedBreaking
10:44 GMTSouth Korea Extradites Russian Citizen Suspected of Cyber Theft to US, Reports Say
10:37 GMTDems Press Manchin Over Paid Family Leave Plan as Biden Wants 'Finish Line' for Reconciliation Bill
10:25 GMTJudge Jails Teenager Who Made 'Bizarre' Contract With Demon to Minimum of 35 Years Behind Bars
10:05 GMTThe Queen Faces 'Two Ferocious PR Storms' With Prince Andrew and Prince Harry, Royal Expert Says
09:37 GMTExtinction Rebellion Climate Change Activists Break Into Oil Refinery in UK - Photos, Video
09:33 GMTUK Home Secretary Patel Says France's Seizure of British Trawler is 'Disappointing'
09:26 GMTChina Asks Russian Electricity Giant to Double Supply in Next Two Months
08:58 GMTGoodbye, Horses? Queen Elizabeth Had to Give Up Riding Due to 'Discomfort', Reports Say
08:32 GMTTaiwan's President Admits US Military Training Taiwanese Soldiers Amid 'Growing Chinese Threat'
08:11 GMTTexas Senate Committee Investigates School Libraries' Books on Racism and Sexuality
08:05 GMTCruise Ship Drug Scandal: Key Witness in Aryan Khan Case Kiran Gosavi Wanted for Cheating, Detained
07:59 GMTChina Blasts US-Taiwan Military Contacts After President Tsai Confirms American Presence on Island
07:50 GMTIndia Rejects Net-Zero Emissions Target, Calls for More 'Carbon Space' From Developed Nations
07:37 GMTPresident Putin Delivers Speech at Russia-ASEAN Summit
07:24 GMT'New Kind of Illiteracy': Reading Performance Among Swedish Children Hits Historic Low
07:14 GMTWhy Saudi-Israeli Relations Remain Tepid Despite Rumours of 'Advanced' Talks to Normalise Ties
07:00 GMTEx-Texas Oil Regulator Predicts US Gas Prices May Remain High for 'Couple of Years'
06:44 GMTOver 30 Cases of Violence Against Journalists Logged in Afghanistan Under Taliban, Reports Say
06:20 GMT'75% of Conversations About Sex': Finnish Ministers Condemn Sexual Harassment Among First Responders
06:03 GMTSecond Day of Appeal Hearing on Julian Assange's Extradition