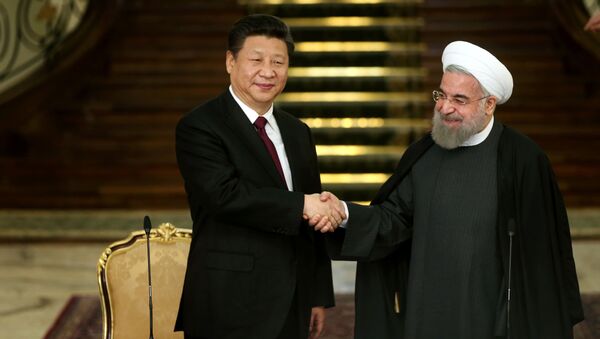 Iran's geostrategic location has made it the key link in China's New Silk Road to Europe, while the Middle East has become one of Beijing's geopolitical pivots.

Following the inking of the Iranian nuclear deal, Beijing has bolstered its economic and political ties with Tehran and with good reason: Iran is not only a prospective supplier of oil and natural gas but also the key geostrategic region for the China-led New Silk Road project.

"Iran is the key link of the "Silk Road" land route to Europe, as it is connected to China by a railway through Turkmenistan and Kazakhstan," Sarkis Tsaturyan, a Russian-Armenian historian and international policy analyst, writes in his latest report for Regnum.

How Russia, China are Creating Unified Eurasian Trade Space
The analyst specifies that he is referring to the Zhanaozen — Gyzylgaya — Bereket — Kyzyl Atrek — Gorgan railway, built between 2009 and 2014.

She points to the fact that since the signing of the Iranian nuclear deal, Beijing is emerging as a principal beneficiary of the agreement.

While the West is still reluctant to finance deals with Iran out of fear of violating sanctions which remain in place, China has jumped at the opportunity to outperform its Western competitors.

China’s New Silk Road Has Beijing Looking West
There are several reasons for China's pivot to the Middle East and most notably Iran.

According to the scholar, Middle Eastern markets are essential for Beijing's New Silk Road initiative to create a network of manufacturing and logistics centers in Central Asia and Europe.

"China's demand for oil imports is expected to grow from 6 million barrels per day to 13 million by 2035, and Iran, ranked fourth in the world in proven oil reserves and second in terms of natural gas reserves, is considered a reliable supplier," she underscores.

Ghoshal points to the fact that China's interest in Iran goes "beyond its energy resources."

"It [China] has a keen interest in Iran's geostrategic location, bordering both the Caspian Sea and the Persian Gulf. The location enables China to carry out the One Belt One Road agenda," the Indian scholar emphasizes.

‘Windows of Opportunity’: Putin Talks Up Russia-China Trade, Investments
Tsaturyan calls attention to the fact that Beijing is racing against the clock to build a route through Iran to the European Union: China wants to create a free trade zone with Europe to outstrip the US' Transatlantic Trade and Investment Partnership (TTIP) project.

Indeed, China's European pivot is no less important than the Middle Eastern one.

"The ultimate prize in the Silk Road plan — also known in China as the 'One Belt, One Road' initiative — is someplace else: Europe," Keith Johnson of Foreign Policy magazine wrote in early June, explaining that the EU bloc represents a bigger and richer market for Beijing than emerging economies along the Road.

Meanwhile, the Transcaucasia region has recently become a "battleground" for the US and China, Tsaturyan adds.

Indeed, while Washington tries to exert its influence on Georgia, Armenia and Azerbaijan — the former Soviet Republics — Beijing and Tehran are engaging the nations' interest in the China-led project.

The analyst remarks, that in this context, Iran's political maneuvers in Armenia and Azerbaijan have acquired a new meaning.

China Spends $1 Trillion on ‘New Silk Road’ to Surpass US on World Stage
On the one hand, Tehran has confirmed its commitment to implementing the Qazvin-Rasht-Astara railway project, with the Rasht-Astara section connecting the rail networks of Iran and Azerbaijan, according to Tasnim News Agency. The new corridor is set to become a multi-purpose route between Iran, Azerbaijan, Europe and Russia.

On the other hand, Iran has abolished its visa regime with Armenia, prompting Bulgarian Prime Minister Boyko Borisov to raise the issue of a new transport corridor between the Persian Gulf and the Black Sea, which would connect Iran, Armenia, Georgia and Bulgaria, Tsaturyan points out, citing Focus News.

Regardless of Washington's displeasure, China and its important Middle Eastern ally Iran are pushing ahead with their new infrastructural projects, aimed at unifying the Eurasian trade space.

And still, when it comes to Caucasus and Transcaucasia, it is Russia which can lend its helping hand to Beijing and Tehran.