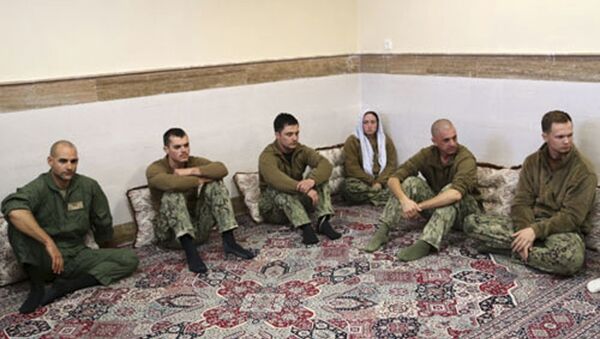 US sailors detained by Iranian intelligence services during interrogation revealed secret information. In an interview with Radio Sputnik military analyst Vladislav Shurygin said that the moral and psychological readiness of the US military is problematic.

Why Pentagon Wants to Punish Sailors After Iran Seizes US Vessel
US sailors were arrested in January in the territorial waters of Iran for illegally trespassing in foreign waters. During the interrogation by the Iranian side, the sailors gave away secret information, according to a special US Navy report on the results of the investigation post incident.

In addition to personal data, the Americans gave up to the Iranian secret services passwords of their electronic devices, details of job assignments and characteristics of the military vessels they were on.

The report on the arrest of the ten crew members by the Revolutionary Guard of Iran said that the cause of the incident was the carelessness of the sailors, who got distracted by repairing the engine and as a result sailed off course and into Iranian territorial waters.

According to US military ordinance, the release of confidential data at the risk of torture is not treason. But, nevertheless, after the investigation, two officers were dismissed; three sailors are facing a disciplinary hearing.

According to military analyst and head of the military unit of Izborsk Club, Vladislav Shurygin, moral and psychological training has never been a strong point of the US military.

“The American army as a system is indeed one of the best, but its soldiers have never had high spirits. Moral and psychological training for the Americans has been an eternal problem.”

He further said that the US Army is contract-based hence only volunteers join it and in the contract there was never an obligation, unlike in the Soviet Army, to protect military and state secrets under a holy oath.

“Ever since the Vietnam War it has been a known fact that a downed aircraft’s pilot will immediately give out all of the information. Incidents when Americans have behaved in captivity ‘rock solid’ are extremely rare.”

“Of course, being a prisoner – is a state beyond reality and often it becomes a biological struggle for life, but if we talk about a specific situation, it greatly tarnishes the Americans’ image because it is obvious that they were not threatened, they were not been tortured. Iran and the United States are not at war so such behavior by the Americans makes one wonder, the military analyst said.