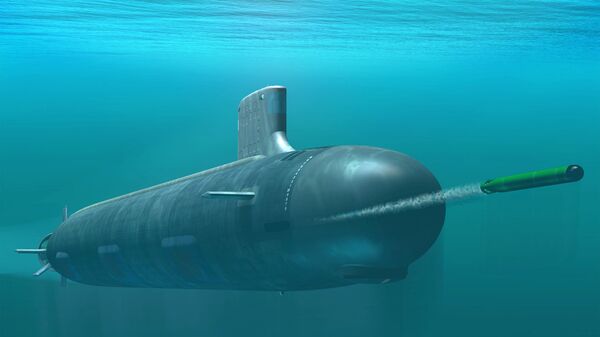 The US Navy is building its new Virginia-class attack submarine the USS South Dakota (SSN-790), claiming that the warship will boast cutting-edge acoustic superiority features that will make it second to none.

"The Emerging Era in Undersea Warfare" report released by the Center for Strategic and Budgetary Assessments back in January 2015 argued that the technological gap between the US and its competitors is narrowing.

"America's superiority in undersea warfare is the product of decades of research and development (R&D), a sophisticated defense industrial base, operational experience, and high-fidelity training. This superiority, however, is far from assured," the report warned.

West Uses Fake 'Russian Submarines' to Justify Its Conflict With Moscow
"America's competitors are likely pursuing these technologies while also expanding their own undersea forces. To sustain its undersea advantage well into this century, the US Navy must accelerate innovation in undersea warfare by reconsidering the role of manned submarines and exploiting emerging technologies to field a new 'family of undersea systems'," it underscored.

To gain an advantage in undersea warfare the US Navy is currently building a new Virginia-class attack submarine USS South Dakota (SSN-790) with "acoustic superiority features" which will make the vessel stealthier.

"The innovations, many details of which are secret and not available, include quieting technologies for the engine room to make the submarine harder to detect, a new large vertical array and additional coating materials for the hull," Kris Osborn of Scout Warrior narrates citing Navy officials.

New Naval Hegemon? What is Behind China's 'Undersea Great Wall' Project
Osborn explains that "acoustic superiority" means engineering a "circumstance wherein US submarines can operate undetected in or near enemy water or coastline" while conducting reconnaissance or attack missions. Furthermore, the vessels boasting such a feature would be able to "sense" adversary's activities at farther ranges than its competitors can.

"We are talking about changes in sensors and changes in the capabilities aboard the ship that we think could be very dramatic in terms of improving our ability to compete in our acoustic spectrum," Rear Adm. Charles Richard, Director of Undersea Warfare told Scout Warrior.

Citing Rear Adm. Charles Richard, Osborn points out that the US Navy effort is related to Russia and China's recent submarine modernization programs, diminishing the technological gap between the emerging powers and the US, thus far threatening Washington's superiority in undersea warfare.

China's undersea warfare capabilities spark Richard's concerns, despite the fact the military official assured Osborn that the US Navy's R&D (research and development) approach will ensure Washington's hegemony at sea.

And still, China's upcoming sharp increase in attack submarines and nuclear-armed submarines (SSBN) may change the balance of power in the Asia-Pacific region in the long run.

It is expected that the new stealthy USS South Dakota (SSN-790) will officially enter into service in August 2018.