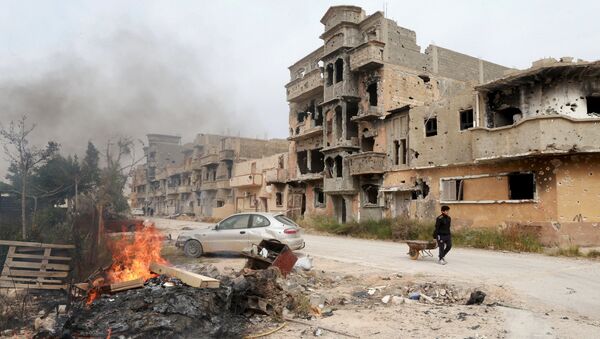 © REUTERS / Esam Omran
Subscribe
Amid rumors of a planned Western ground invasion of Libya, officials, speaking on condition of anonymity, report that the US military established two outposts in the North African country at the end of last year.

As the US and its allies fight Daesh, also known as IS/Islamic State, the coalition refuses to acknowledge that its invasion of Iraq led to the rise of the violent extremist group. Similarly, the Daesh spread into Libya can largely be attributed to the NATO-led ousting of Muammar Gaddafi.

But having effectively shattered a once-stable Libya, the US may preparing a second assault on the country.

US officials have confirmed that the Pentagon has established a pair of "military outposts" containing "fewer than 25" troops, one near the coastal city of Misrata, the other near Benghazi to the east.

"It is noteworthy that neither of these areas are under the control of the UN-backed governments, though Misrata is largely aligned with the Tripoli parliament, a third government that the UN doesn’t recognize," Jason Ditz writes for AntiWar.com.

While any operation would be ostensibly aimed at rooting out Daesh, Benghazi is far from the extremist group’s frontlines.

"Neither base is particularly close to ISIS-controlled territory in Libya, which is centered around the city of Sirte," Ditz writes.

Last month, Italian Prime Minister Matteo Renzi said that Italy would not intervene in Libya without cooperation from its partners.

UK Foreign Secretary Philip Hammond said that his government would not "rule out" such an operation.

"It wouldn’t make sense to rule anything out because you never know how things are going to evolve," he told the Telegraph.

"If naval or air support was requested for such an action, we would obviously look at it."

Still, as Ditz points out, these military actions would be at the behest of a self-appointed government that lacks any real control in Libya, and "its value seems to be limited to giving the imprimatur to a Western invasion."