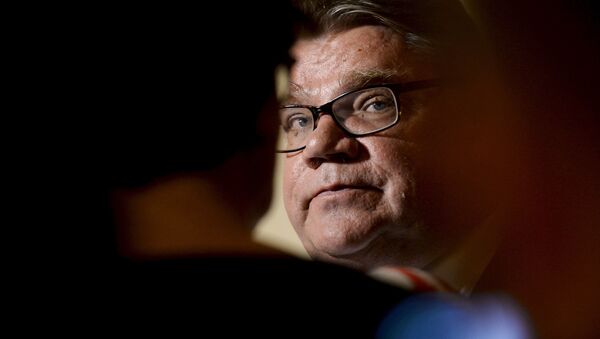 Amid rising anti-Russian sentiment in Europe and US military drills across the continent, Finland's Foreign Minister Timo Soini of the populist Finns Party has revealed that he has sought to promote US-Finnish relations, and lauded Washington's commitment to Europe as a guaranty of Finland's security.

First Base: US Fighter Jets Make Their Debut on Finnish Soil
The US has no choice but to further strengthen its presence in Europe due to Russia's recent actions, Timo Soini said while addressing the Paasikivi Society on Monday. According to him, by enhancing its military presence in the Baltic region, the US promotes safety and security in the region. Soini is the leader of the Finns Party, part of the country's governing coalition.

"The United States' commitment to Europe is of particular significance to Finland," he said, according to the newspaper Uusi Suomi.

According to Soini, such ceremonial speeches draw attention to the fact that Finland is part of the West. Finland's Foreign Minister also denounced the tendency to label Finland as a country caught between the East and the West. According to Soini, the mantras regarding Finland's fence-sitting during the Cold War have taken on a life of their own.

"We should have the courage to say loud and clear that good relations with the US are very important to Finland. The US is crucial for the security interests of Finland, regardless of whether the broader concept of security or the more traditional concept of military security is meant," Soini said.

Not Without My Neighbor: Finland, Sweden Ponder NATO Membership, Again
Soini ascertained that a greater intimacy with the US does not contradict Finland's attempt to maintain cordial relations with Russia. According to Soini, NATO is another key factor safeguarding Finland's national security.

"Finland's security depends largely — but not exclusively — on the commitment of the United States in Europe, the powers of NATO and the alliance's stable policy-making. This remains true regardless of the fact that we are not a member state," said Soini.

The Paasikivi Society was founded in Helsinki in 1958 and was named after the country's seventh president Juho Kusti Paasikivi. The goal of the foundation is to raise the nation's awareness of Finland's foreign policy.