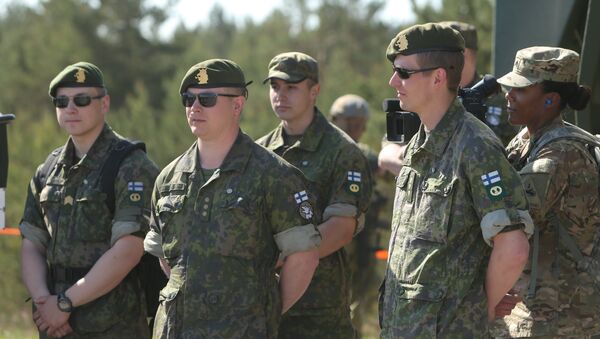 Finland and Sweden should follow the same line with respect to joining NATO; otherwise there may be trouble. Should either of the countries venture into NATO alone, the growing voltage may set off sparks on Russia's part, says a report by an expert group on behalf of Finland's Foreign Ministry.

It has been almost ten years since the Finnish government last investigated its relations with NATO. During that time, some major political changes have occurred both on the international and the European level.

Only Fools Rush In: Sweden and Finland Barging Into NATO's 'Open Door'
The study on the consequences of Finland's possible NATO membership has been carried out by a panel of renowned diplomats and researchers, featuring Mats Bergquist (Sweden's former ambassador to Helsinki), François Heisbourg, (political scientist and former French diplomat) René Nyberg (former Ambassador to Moscow) and Teija Tiilikainen (Director of the Foreign Policy Institute), Finland's national broadcaster Yle reports.

A Finnish NATO membership would certainly trigger a fierce Russian response, says the study. The Finnish-Russian relations would be damaged beyond repair, whereas the Russian rejoinder most likely would be sharp and probably also "personal," which the incident involving the Russian fighter jet shot down by the Turkish air defense clearly showed, the authors write.

The investigators predict a vigorous initial reaction from Russia, a loud-mouthed opposition to NATO extension, accompanied by political and economic threats and followed by a quiet acceptance of the facts.

As NATO Crawls Further, Sweden Stands Firm on Non-Alignment Principle
Focus on Article 5: "one for all, all for one"

According to the study, Russia's war against Georgia and the takeover of Crimea has once again stressed the importance of the famous Article 5, which refers to the principle of collective defense. As NATO partners, neither Finland nor Sweden is covered by the mutual defense clause.

Investigators proceed from the scenario in which Finland and Sweden seek NATO membership simultaneously. Other scenarios may incur various difficulties whereas by working together, the two Nordic countries may achieve a greater influence, be it in inside or outside NATO.

Russia Finalizing Next-Gen Missiles to Deploy in North if Sweden Joins NATO
Should Sweden join NATO alone, Finland would become more fragile and vulnerable. Should Finland instead join NATO, a precarious situation may arise, in which Finland becomes an outpost with almost no land border with the rest of NATO, the report says.

According to the study, an application for membership in the Atlantic Alliance would take place amongst international tension. Investigators take no stance on whether the issue should be solved through a referendum or a parliamentary decision.

Swedish Gov’t ‘Lying’ About ‘Russian Threat’ to Enter NATO
However, simultaneous referenda in Finland and Sweden could potentially lead different to outcomes, which would result in a tricky situation, according to investigators.

Mutual benefits in store as long as no nukes are involved

According to the study, full-scale NATO membership would yield mutual benefits for the parts involved. Finland would hereby obtain a clearer picture of the air situation near Russia, whereas NATO would make use of Finland's territorial defense, which is considered superior to the Baltics'. In addition to the territorial defense, Finland's IT skills and cyber defense would be appreciated, as well as the country's special expertise in hybrid warfare, the study suggests.

'Don't Believe Rumors': Sweden is Not Going to Join NATO
Economically, the possible membership is bound to cost Finland more. NATO's goal for all member countries is a defense output of two percent of GDP. However, only five of the 28 members lived up to the goal in 2015. Finland currently spends about 1.3 percent of its GDP on defense, so the outlay is expected to rise.

"The NATO membership would obviously strengthen Finland's immediate security, as the country then would be subject to security guarantees under Article 5, with the membership strongly deterring possible attacks against the country. However, the membership is also likely to lead to a serious crisis with Russia for an indefinite period. Tensions would rise, but an open conflict is unlikely to ensue, since Russia would be aware that any assaults could lead to retaliation from the whole alliance."