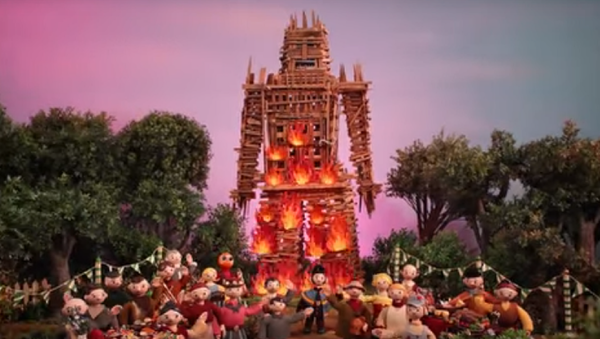 On Tuesday, Radiohead released a haunting new track and music video, titled “Burn the Witch.” Using claymation techniques to tell the story of the Wicker Man, the video is in the style of the 1960s British children's television show “Trumpton.”

Prior to release of the new song, the band deleted their entire official social media presence, including changing photos and avis to blank white images, leaving fans furiously speculating.

On Monday evening, the band began sharing teasers from the video on Instagram without explanation. The next morning, the new video was posted to YouTube.

“Stay in the shadows / Cheer the gallows / This is a round-up,” the new song begins.

“Loose talk around tables / Abandon all reason / Avoid all eye contact / Do not react / Shoot the messenger / This is a low-flying panic attack.”

After the video was released, both "Burn the Witch" and "Radiohead" trended in the top 10 on Twitter.

The iconic rock band has not released a new album since 2011’s ‘The King of Limbs’, and fans went into a frenzy when the website, Facebook, and Twitter accounts for the band were whited out with no explanation or statement.

According to Pitchfork, the band had teased its listeners in live performance with chords from “Burn the Witch” as far back as 2006, and on Saturday, some UK fans of the band received postcards that somewhat creepily read, "Sing a song of sixpence that goes / Burn the Witch / We know where you live.”

The last time Radiohead released an album was 2011’s “The King of Limbs,” which was also self-released, after being announced just four days earlier. That announcement came on February 14 that the album would be released on the 19th — but they ultimately dropped it a day earlier. Initially only available as a download, the band released physical versions over a month later.

The unique public behavior of the band’s promotion and performance, and release of a new song, has many speculating that a ninth album from the band will be on its way soon. The band is set to embark on a world tour later this month.