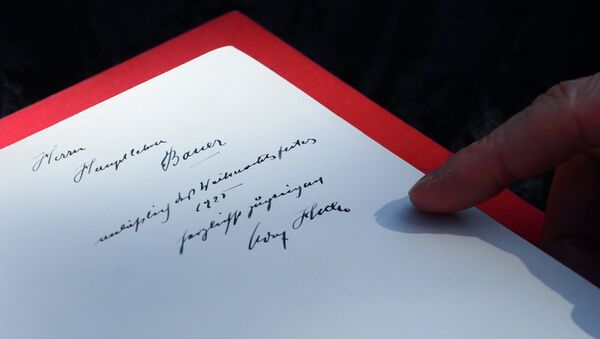 More than a dozen people were determined to obtain the desired lot during an auction in the United States, media reported.

The exclusive edition owned by Adolf Hitler and discovered in his apartment was ultimately sold for $20,655 on Friday in Chesapeake City, Maryland. The book was apparently kept by the Nazi leader for personal purposes.

The book had been found by American soldiers during an inspection of Hitler's apartment in 1945. To confirm its authenticity, eleven US servicemen put their signatures on its flyleaf and since then the book has been kept by the daughter of one of the soldiers.

History Repeats? Hitler’s 'Mein Kampf' on Sale in Germany Again
Organizer of the auction Bill Panagopoulos said that the controversy surrounding the book is not a reason to keep it away.
The most important thing is that we do not repeat the sins of the past, Panagopoulos said.

In early January, Germany started to sell copies of a heavily annotated version of "Mein Kampf" for the first time in 70 years.

Some teachers even suggested including the book in the school curriculum in order to explain to children what extremism is and to protect them from following radical ideas.