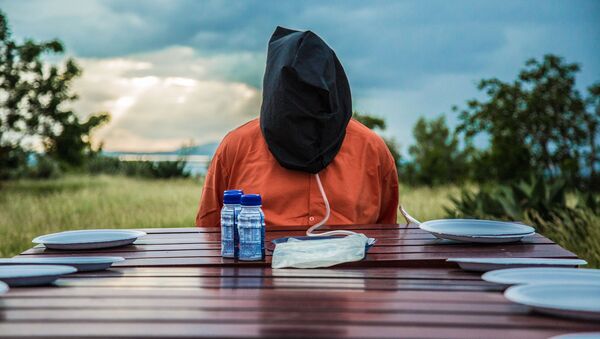 ​Friday, March 11, 2016, marks 14 years since the first detainee arrived at the Guantanamo Bay prison camp. Loud & Clear's Brian Becker sat down to talk with activist Jeremy Varon of Witness Against Torture, about the macabre legacy of the Guantanamo facility and the prospects for the release of the men who are condemned to indefinite detention.

"The prospects of it closing are dim," said Varon. "Obama sent a plan to Congress for closing and everybody from the Republican establishment to the media declared it dead on arrival. There are congressional bans on moving any detainee to the United States, and Obama seems reticent to use executive authority to override that act of Congress. So, right now we basically have a failed policy on life support. "

The United Nations declared Guantanamo a torture center. Torture violates US law and treaty obligations, so doesn't President Obama have executive authority to shut it down?

Varon explains that Guantanamo Bay was created by an executive order, which may provide President Obama the power he needs to counter continued congressional resistance.

However, the likelihood of President Obama invoking executive authority on the matter is unlikely, due to resistance within his administration. "The attorney general said that such a move would be a violation of a standing law, and a high-up US Defense Department official said that the DoD refused to act contrary to the US Congress, even if ordered through an executive action. The Obama Administration cannot even get on the same page regarding this issue."

Varon also suggested that part of the difficulty in convincing the public and congressional Republicans that closing the facility serves US interests is that they have ceded the moral high ground. "In Beltway circles, nobody has talked about closing it because it is a human rights abomination and a place where illegal things happen. They refer instead to whether or not it provides actionable intelligence."

What happened at Guantanamo? The real story

Guantanamo opened on January 11, 2002, as a facility to interrogate "war on terror" detainees. President Bush "intentionally put it in a place that was under US military jurisdiction so federal and human rights laws would not apply," said Varon.

Subsequently, former Secretary of Defense Donald Rumsfeld took the policy position that the Geneva Conventions did not apply to Guantanamo because this was a new kind of “enemy combatant,” who had no standing in any global or national legal system. "They stripped the detainees of any rights," Varon stated.

"Guantanamo was not about gathering evidence for trial or justice for the 9/11 families, it was conceived as a place of brutal, withering interrogation to gather intelligence in the "war on terror," but it failed even in that goal," said Varon. The value of intelligence and confessions gathered under duress and torture at the facility has been called into question, with military officials saying the torture center failed to provide a single piece of actionable intelligence.

Varon detailed a description by Shaker Aamer, a UK resident who was released after 13 years in the Guantanamo Bay torture facility. "The purpose of Guantanamo is to destroy human beings, that is its only intent, there is a draconian regime of surveillance and persecution to destroy the spirits and destroy the souls," Varon quoted.

Conditions in the facility are reported to be dire enough that, for years, detainees have protested by hunger strikes with violent guard responses, including a "very brutal practice where plastic tubes rammed down their throats and the people subjected to this saying they feel as though they are dying, they feel as though they are suffering a living death," said Varon.

One former Guantanamo Bay guard speculated that the facility was designed to experiment with "exotic, avant-garde types of psychological warfare, a laboratory to experiment in ways to manipulate and destroy the human spirit."

Over 95% of the detainees have never been convicted, how did they end up in Guantanamo Bay?

Varon detailed what he called the "very sloppy dragnet" that led to the capture of more innocent civilians than terrorists. Following the US invasion of Afghanistan, there were thousands who fled the warfare and chaos. The United States picked up a lot of these refugees in a dragnet by paying bounties to warlords and to the government of Pakistan to turn over captives to the US. Unlike in prior US conflicts, "there were no hearings to determine the status of the detainees, whether they were civilians, military, or enemy combatants."

The other large population at Guantanamo Bay, explained Varon, were actually conventional opposition military forces, as opposed to unallied terrorists. "The Taliban was a sovereign state that did have an actual army that was fighting in a war against the United States as an invading army, and under the Geneva Conventions you cannot detain, interrogate, torture, and strip of all rights a prisoner from an opposing army."

International scholars investigating the population at Guantanamo Bay found that "only a tiny, tiny handful approached the description of 'worst of the worst' that [former US Vice-President] Cheney used years ago to tar the whole population."

In Varon's opinion, "the majority of the people there should have never been there in the first place."

Why did the US choose Guantanamo Bay, which is in Cuba and against the will of the Cuban people?

"It was deliberately selected as a site by the architects of the policy as beyond the reach of federal law, certainly not under Cuban sovereignty — part of no nation and hence a legal black hole," said Varon.

Varon suggests that the location wasn't chosen solely on the grounds of avoiding legal accountability, but also to limit public and media access. "The population of Guantanamo is hidden," he said, "they cannot lawfully be photographed, no journalist can interview men in prison in face-to-face interviews. It is a population who we were designed not to see and the idea is that if they are cloaked in invisibility then we can do horrendous things to them without any system of transparency and accountability"

The Cuban people deeply resent the American occupation of the area in the first place. But, Varon remarked, "They consider it is a terrible insult to the injury of occupation that a horrible human rights abuse is being perpetrated on their soil."