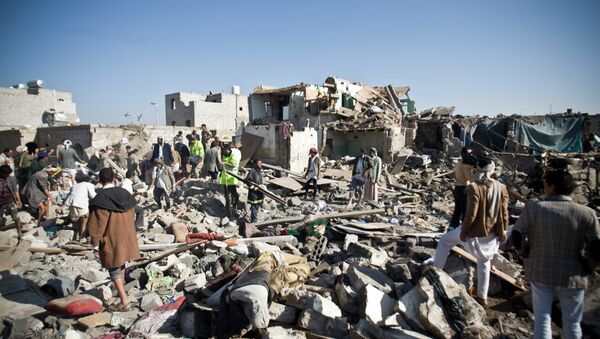 On Monday, the European Parliament voted 359-212 on a non-binding motion calling for all EU nations to impose an arms embargo on the Saudis, citing concerns over civilian deaths and the arms finding their way into the hands of terrorist organizations including Daesh. The embargo came after months of human rights groups demanding a stoppage of European arms exports to the Saudis, and was hailed as a historic first step towards protecting innocent civilians throughout the Middle East.

It would seem, though, that the European Parliament’s vote was much ado about nothing.

On Tuesday, British Prime Minister David Cameron bragged about the expansion of British arm sales to the Saudi Kingdom celebrating the "brilliant things," like Typhoon warplanes, that British arms manufacturer BAE Systems produced for the Saudis.

Cameron went further, saying that over the next several months his administration would be focusing on exports to ensure BAE warplanes "are available and sold all over the world." But first, he observed, "We’ve got more work to do for Saudi Arabia."

Amnesty International immediately condemned Prime Minister Cameron’s statements, commenting that "the UK is setting a dangerous precedent to the rest of the world by continuing to supply arms to questionable regimes such as Saudi Arabia." Oliver Sprague, Amnesty’s UK Arms Control Program Director, said further that "The ‘brilliant things’ that David Cameron says BAE sells include massive amounts of weaponry for the Saudi military, despite Saudi Arabia’s dreadful record in Yemen."

For months, the Saudis have faced widespread international criticism for repeated reports of indiscriminate civilian killings as a result of their airstrikes. A UN report declares the Saudi airstrikes tantamount to a war crime, with findings that practices maximizing civilian casualties were deliberate. Despite this, both the US and UK governments support Saudi Arabia in the Yemeni conflict and remain the top two purveyors of Riyadh’s death machines.

Domestic economic incentives, for both the US and the UK, appear to be driving the continuation of arms sales. On Tuesday, before an audience in London, Cameron noted "I think it is absolutely right to get behind companies like BAE in order to safeguard jobs, skills, and investment by making sure we can sell these things around the world."

Amnesty’s Sprague finds the sales not only repulsive, but also in contravention to international law. "Thousands of Yemeni civilians have been killed and injured in devastating and indiscriminate Saudi coalition air strikes, and there’s strong evidence that further weapons sales to Saudi Arabia are not just ill-advised but actually illegal," he said.

Unfortunately for civilians in Yemen, the Saudi arms trade may be illegal, but is also very profitable.