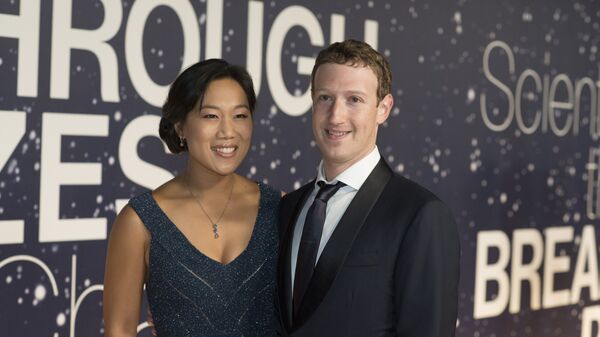 © AP Photo / Peter Barreras
Subscribe
The co-founder of social media goliath Facebook has announced that he and his wife plan to donate 99% of their company shares to charity – shares that are currently worth roughly $45 billion.

Zuckerberg to Provide Refugee Camps With Internet Access
Already a prominent philanthropist, Mark Zuckerberg has announced that he and his wife, Dr. Priscilla Chan, will give 99% of their fortune to charity throughout the course of their lives. That money will be spent through a new charitable organization to be founded by the couple.

"We will give 99% of our Facebook shares – currently about $45 billion – during our lives to advance this mission. We know this is a small contribution compared to all the resources and talents of those already working on these issues. But we want to do what we can, working alongside many others."

According to the letter, the Initiative will focus primarily on personalized learning, building communities, and curing disease.

Earlier this week, Zuckerberg was also among the co-signers of the Breakthrough Energy Coalition, organized by Microsoft co-founder Bill Gates. That group plans to work toward the promotion of clean energy.

Zuckerberg and Dr. Chan have also made large contributions to provide high-speed Internet access for classrooms, as well as a $25 million donation to the US Centers for Disease Control to help combat Ebola.

According to Forbes, Zuckerberg is the 16th richest person in the world. Warren Buffett, worth an estimated $72.7 billion has also pledged to donate 99% of his wealth after his death, while the world’ richest man, Bill Gates, has said he plans to give 95% of his fortune to his own charitable foundation.

000000
Popular comments
So he will give his money, to his OWN foundation... maybe... some day, in the future...
2 December 2015, 02:16 GMT4
000000
This idea leaves too much to the imagination as to its legal framework and moral-ethical consequences. Personally, I have no sense of accomplishment with this idea than I did when Ted Turner giving the United Nations one billion dollars over a ten year period. In his case, he did it to avoid the taxes, and now we have another potential case of the rich avoiding taxes. See what I mean?
marcanhalt
2 December 2015, 02:20 GMT1
000000
Newsfeed
0
New firstOld first
loader
LIVE
Заголовок открываемого материала
Access to the chat has been blocked for violating the rules . You will be able to participate again through:∞. If you do not agree with the blocking, please use the feedback form
The discussion is closed. You can participate in the discussion within 24 hours after the publication of the article.
To participate in the discussion
log in or register
loader
Chats
Заголовок открываемого материала
Worldwide
InternationalEnglishEnglishMundoEspañolSpanish
Europe
DeutschlandDeutschGermanFranceFrançaisFrenchΕλλάδαΕλληνικάGreekItaliaItalianoItalianČeská republikaČeštinaCzechPolskaPolskiPolishСрбиjаСрпскиSerbianLatvijaLatviešuLatvianLietuvaLietuviųLithuanianMoldovaMoldoveneascăMoldavianБеларусьБеларускiBelarusian
Transcaucasia
ԱրմենիաՀայերենArmenianАҧсныАҧсышәалаAbkhazХуссар ИрыстонИронауОssetianსაქართველოქართულიGeorgianAzərbaycanАzərbaycancaAzerbaijani
Middle East
Sputnik عربيArabicArabicTürkiyeTürkçeTurkishSputnik ایرانPersianPersianSputnik افغانستانDariDari
Central Asia
ҚазақстанҚазақ тіліKazakhКыргызстанКыргызчаKyrgyzOʻzbekistonЎзбекчаUzbekТоҷикистонТоҷикӣTajik
East & Southeast Asia
Việt NamTiếng ViệtVietnamese日本日本語Japanese中国中文Chinese
South America
BrasilPortuguêsPortuguese
NewsfeedBreaking
09:02 GMT'Chinese Babydoll Army': Indian Netizens Mock Clip of PLA Troops Dancing in Snowy Mountains
08:47 GMTGeorgian Police Use Pepper Spray Against Saakashvili Supporters Near Court
08:36 GMTPrince Charles Lawyers Up Over Speculation He Was 'Racist' Royal Who Asked About Archie's Skin Tone
08:18 GMTAs Iran Nuclear Talks Resume, Will Israel Ever Exercise Military Option?
08:04 GMTOmicron Variant: Panic Grips Indian Officials as Passenger From South Africa Tests COVID-Positive
08:01 GMT'Omnibus of Omnishambles': Boris Johnson Facing SNP Motion of Censure in Parliament
07:41 GMTKeane & Carragher Engage in War of Words Over Cristiano Ronaldo's Place in Man Utd's Starting XI
07:40 GMTNetizens Split as Indian Comedian Munawar Faruqui Hints at Quitting Stand-up
07:13 GMTFiji Dispatches Troops to Honiara as Solomon Islands Announces State of Public Emergency Until March
07:04 GMTRosneft CEO: Russia-China Trade Turnover Creates Great Potential for Payments in Yuan and Rubles
06:52 GMTTrump Wanted to Keep Bagram Base Under US Control After Afghan Withdrawal 'Because of China'
06:51 GMTSocialist Xiomara Castro Leads in Honduran Presidential Race
06:36 GMTThird of Swedish Police in Blighted Areas Have Mental Issues – Survey
06:27 GMTFormer US Defence Chief Mark Esper Sues Pentagon for 'Blocking' Parts of His Memoir
06:09 GMTPriti Patel to Hold Talks on Migration Crisis With European Ministers Despite French Snub
06:00 GMTKnow-How: Who Actually Made Scythian 'Gold'
05:59 GMTDenmark Bans Influencers From Advertising Cosmetic Surgery, Sugar Dating to Minors
05:51 GMTUK Convenes Urgent G7 Ministerial Meeting Over COVID Variant Omicron as WHO Urges Not to Panic
05:07 GMTMass Killer Breivik Sending Letters to Survivors With Excerpts From His Manifesto
04:47 GMTCOVID Live Updates: WHO Says Omicron Variant is Likely to Further Spread at Global Level