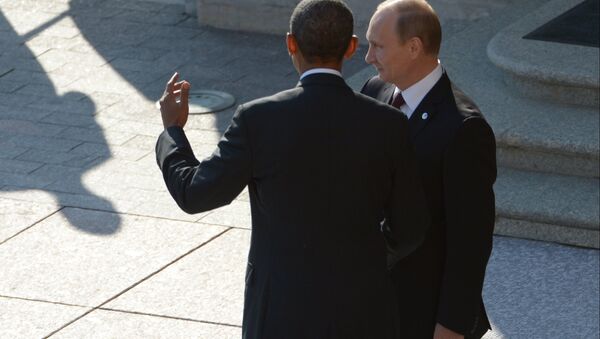 Finian Cunningham
All materials
It’s not over yet. But six weeks after Russia’s President Vladimir Putin made the bold and principled move to intervene militarily in Syria, the result is already showing a stunning victory.

With Russian air power wiping out hundreds of foreign-backed terror targets, the Syrian Arab Army appears to be decisively turning back the enemy.

Kweiris Airbase is ‘Biggest Achievement' of Syrian Army in Long Time
The latest gains by the Syrian state forces to liberate a key airbase near the northern city of Aleppo and surrounding countryside from the siege of terror groups is proving that Putin was so right in his intervention.

After a year of US-led air strikes against the so-called Islamic State, Syria was under more threat than ever from the wannabe jihadists. Six weeks after Russian air strikes, the same mercenary network is now on the run. The enemy is in disarray and in retreat.

Recall that when Moscow ordered in the military support for Syria to defeat the terrorists, US President Barack Obama immediately excoriated Putin for the move, saying that it was “doomed to fail”.

Carter Needs to 'Change Spectacles' to Get Clear View of Russia
Just last week, the US Secretary of Defence Ashton Carter accused Putin of “throwing gasoline” on Syria, and he predicted that Russia’s intervention would lead to more terrorism.

Well, how wrong can they be? Far from failure or throwing gasoline, Russia is putting Syria back on its feet, and helping the Syrian army to rid that country from the scourge of terrorism.

The latest strategic victory of the Syrian state forces against ISIL and its assorted jihadists, including the so-called “moderate rebels”, proves a few things. Firstly, Putin made the right call. It was a brave move because there was a risk of Russia becoming stuck in an Afghanistan-style quagmire, as Obama and various other Western pundits were excitedly predicting (wanting). That’s not the case, as can be seen even after only six weeks.

Secondly, the gains made this week by the Syrian army on the ground around Aleppo against the jihadists also demonstrate that, contrary to Western claims initially, Russia’s air strikes were from the outset against the terror network. The Kweires airport near Aleppo was under siege from IS and its terror legions for the past two years. There is no denying that fact, even by the lying Western media propaganda machine.

The Russian intervention, legal under international law because it was at the request of the sovereign government of Syria, is dealing deadly blows against the terror groups, just as Russia had said its intervention was about, from the very outset.

As ISIL and other jihadists run for cover from Aleppo, Idlib, Homs, Hama, East Ghouta and other locations, the Western media are having spasms about how to spin that, especially since they have been spinning the delusional narrative that Russia had been attacking “moderate rebels” instead of terror groups.

Obama, Putin May Talk on Sidelines of G20 Meeting - White House
When Putin meets Obama next week at the G20 summit in Turkey, the Russian leader might consider having a handy napkin in his pocket.
Because Obama is going to have serious metaphorical egg dripping all over his face.

Earlier, when the leaders last met at the United Nations’ General Assembly in New York at the end of September, it is believed that Putin told his American counterpart during a private meeting that he had better stop messing around in Syria and join a serious joint effort to defeat the terrorists in Syria. After all, that was what the Americans and their allies have been claiming they were doing for the past year.

Two days after the meeting in New York, Putin made his decisive move and ordered in warplanes to take out the terror rings that have plagued Syria for more than four years. The American bluff was called.

They did not take up Putin’s challenge.

Instead, the Americans and their Western minions tried every which way to undermine the Russian intervention, using media dirty tricks and lies to smear, with claims of civilian casualties and strikes against fictitious “moderate rebels” and hospitals, even while the US was killing dozens of civilians at an actual hospital in Afghanistan, and also in Yemen with its British-Saudi-Arab coalition.

The victories of the Syrian Arab Army are now starting to gain momentum – and that’s in large part due to Putin’s principled support for Syria. People in Damascus and other Syrian cities and villages are beginning the celebrate a long-awaited relief from the foreign-backed terror scourge that has afflicted their country.

Success of Russia's Operation in Aleppo Expected to Silence Western Critics
There is an opening now for a genuine political resolution to the conflict that has claimed over 250,000 lives and turned half the population into refugees. But that opening was only made possible by Russia’s military support for Syria.

Of course, we should know why Obama and other Western leaders refused to join Russia in its anti-terror campaign in Syria, and why they tried at every step to undermine Putin. The Western governments and their media have been fully complicit in supporting a terrorist conspiracy to destabilise and overthrow the Syrian state. They are up to their necks in fuelling a terrorist covert war on the sovereign state of Syria in total violation of international law. How could these rogue state sponsors of terrorism possibly support Russia anyway?

The four-year war in Syria, as touted by Western governments and their media, has been a vile travesty from the beginning. A nation has been nearly brought to its knees because of the Western-backed terrorist onslaught on that country. We have witnessed one of the greatest crimes being perpetrated in modern times, and all with the involvement of Western governments, their media and their regional client regimes, including Saudi Arabia, Qatar, Jordan, Israel and NATO member Turkey.

Russia’s incisive military intervention in Syria is a modern-day Stalingrad. A truly evil complex of criminal forces – from Western governments to their terrorist proxies on the ground – is being defeated.

Meanwhile, laughably, this week Western media were full of lame headlines about alleged Russian drug abuse in sports. If they want to play the sports analogy, that’s fine. For the result in all that matters – the defeat of international state-sponsored terrorism in Syria – is this: Russia 1, the West Nil.

Team Putin has run rings round Team Obama. Time for them to leave the field and take a cold shower.