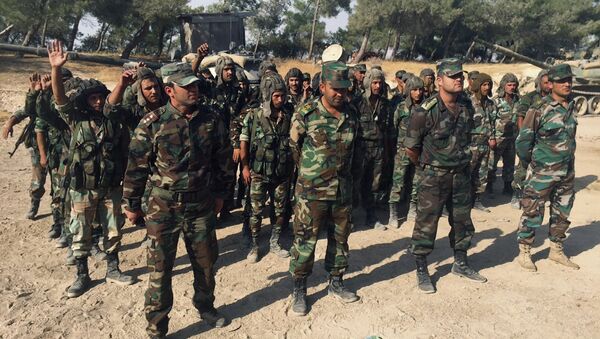 ISIL is quickly losing ground as a result of combined military operations carried out by Russia, the Syrian Army, as well as Iraqi and Hezbollah volunteer fighters, Aymenn Jawad al-Tamimi, a research fellow from the Middle East Forum, told Radio Sputnik.

The Syrian Army's successful operation to return the Kweiris military airbase was an astonishing victory for the Syrian government, al-Tamimi explained.

On Tuesday, Syrian forces continued their offensive against terrorists in Eastern Ghouta and took control over strategic areas from terrorists. The Syrian Army also took full control over the al-Mahalej area, to the south of the Marj al-Sultan Airbase.

On the same day, the Syrian Army lifted the siege of the Kweiris military airbase. The Kweiris airbase was under ISIL siege for two years until the Syrian Army supported by Russian airstrikes advanced into the area and cleared it of jihadists, leaving a large number of them dead and wounded in the process.

"The clearing of ISIL from the Kweiris airbase is the biggest ground achievement [of the Syrian Army] since the Russian airstrikes began," al-Tamimi told Radio Sputnik.

Russian airstrikes played a key role in helping the Syrian Army to successfully conduct their offensives. In addition to the Russian Air Force, the military operations in the Aleppo province brought together a number of pro-Syrian government forces, such as volunteer troops from Iraq and Hezbollah fighters, the political expert on the Middle East said.

The Tables are Turning: Syrian Army Pushes ISIL Out of Key Areas
The military scheme that so far has proved successful goes as follows: first, Russian airstrikes bomb ISIL-controlled positions destroying their command centers, artillery, tanks, mortar positions and other heavy weaponry, then the Syrian Army and its allies carry out ground offensives, clearing areas of terrorists.

Despite the recent success of the Syrian Army, al-Tamimi said it's not the end of ISIL and the fight against the terrorist group would continue on other fronts. He warned that other areas in Syria now might come under ISIL-attacks, as the group would likely re-group and try to take over other areas.

Syria has been engulfed in a civil war since 2011, with the Syrian Army fighting a number of opposition factions and radical Islamist groups, including ISIL and the al-Nusra Front.