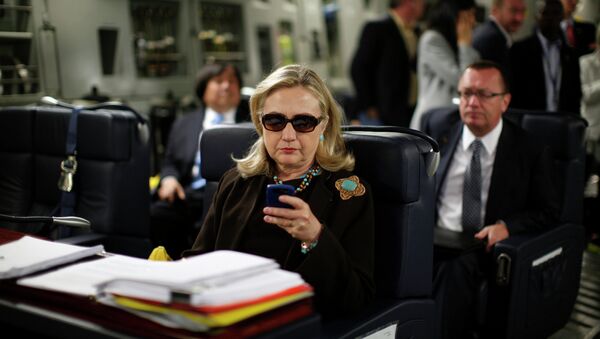 © AP Photo / Kevin Lamarque
Subscribe
While democratic presidential hopeful Hillary Clinton vows to continue the US' longstanding "war on terrorism," it is Rodham Clinton who has undisputedly worked for the benefit of international terrorism, US analyst Caleb Maupin claims.

The US analyst referred to the infamous terrorist organization Mujahadeen E-Khalq (MEK), or the People's Holy Warriors, which was involved in the mass murder of Iranians and Americans in the 1970s.

During the Iran-Iraq war MEK joined Saddam Hussein dubbing itself the "Iranian National Liberation Army." The notorious mujahadeens unleashed a massacre in the Iranian countryside killing a large number of peaceful civilians.

After the war, the Hussein government "utilized" MEK to exterminate the Kurds. The overall number of victims killed by MEK amounted to tens of thousands.

Surprisingly, "in September of 2012, then-Secretary of State Hillary Rodham Clinton officially removed MEK from the list of designated terrorist organizations. Because of this designation by Rodham Clinton, it is now legal for anyone in the United States to provide material support to the MEK terrorists. MEK has continued its shady relationship with Rudy Giuliani, Tom Ridge, and a number of other politicians," Maupin pointed out.

And that is not all, the US analyst noted, revealing that the other legally designated terrorist group "that Clinton apparently has a soft spot for" is the Nigerian Boko Haram. The extremist Islamic sect founded in 2002 is responsible for growing chaos in Nigeria. In March 2015, Boko Haram pledged allegiance to the brutal Islamic State.

There is an obvious explanation for this mysterious, irresponsible and irrational behavior of the democratic presidential hopeful. It's all about oil, Maupin underscored.

Insouciance Rules The West
Indeed, the MEK terrorists are seeking to topple the government of oil-rich anti-imperialist Iran. In its turn, Boko Haram is destabilizing Nigeria that has become Africa's top oil-producer after US/NATO forces bombed Libya into havoc.

And of course, everyone remembers Clinton's reaction to Libya's President Muammar Gaddafi's gruesome murder: "We came, we saw, he died," Clinton said with laughter.

"Nigeria and the Islamic Republic of Iran are both oil-exporting countries that function as competitors to the US-aligned Gulf states in the Middle East. Saudi Arabia, the United Arab Emirates, Qatar, Oman, and Bahrain are all US-aligned Gulf states. Their resources are controlled by Wall Street and London-based oil corporations. The more that Iran and Nigeria can be destabilized and inhibited in their ability to export, the more profits Wall Street and its Arab vassals can make," the analyst stressed.

Remarkably, the Gulf state elites have their own links to terrorism. Currently they are funding al-Qaeda's affiliate Al-Nusra Front in Syria as well as the so-called "Free Syrian Army" which seeks to overthrow Bashar al-Assad.

It is worth mentioning that notorious Osama Bin Laden also had certain connections to influential Saudi aristocrats.

"Clinton, like all major politicians in the United States, is an agent of big money. Terrorism in the Middle East and other parts of the world is highly beneficial to the rich and powerful… Don't be fooled by her campaign rhetoric. Clinton's long record in the service of terrorism speaks for itself," Maupin concluded.

000000
Popular comments
The greatest vulnerability of the Outlaw Empire is having its longstanding terrorist acts and support for terrorism trumpeted to the world 24/7/365 using the incredible numbers of facts so to turn the assured cry of Propaganda! on its head before the cry can be made. It should be headline news globally on January 20, 2017 when the newly installed president of the Outlaw Empire refuses to arrest the terrorists s/he supplants--Just as Obama should've done in 2009. The USA is an Outlaw Empire because it violates its own and international laws with impunity, and must be held to account if we're to know peace and save our environment. Truth telling isn't propagandizing; its journalism at its highest ethically.
karlof1
22 August 2015, 23:27 GMT
000000
Newsfeed
0
New firstOld first
loader
LIVE
Заголовок открываемого материала
Access to the chat has been blocked for violating the rules . You will be able to participate again through:∞. If you do not agree with the blocking, please use the feedback form
The discussion is closed. You can participate in the discussion within 24 hours after the publication of the article.
To participate in the discussion
log in or register
loader
Chats
Заголовок открываемого материала
Worldwide
InternationalEnglishEnglishMundoEspañolSpanish
Europe
DeutschlandDeutschGermanFranceFrançaisFrenchΕλλάδαΕλληνικάGreekItaliaItalianoItalianČeská republikaČeštinaCzechPolskaPolskiPolishСрбиjаСрпскиSerbianLatvijaLatviešuLatvianLietuvaLietuviųLithuanianMoldovaMoldoveneascăMoldavianБеларусьБеларускiBelarusian
Transcaucasia
ԱրմենիաՀայերենArmenianАҧсныАҧсышәалаAbkhazХуссар ИрыстонИронауОssetianსაქართველოქართულიGeorgianAzərbaycanАzərbaycancaAzerbaijani
Middle East
Sputnik عربيArabicArabicTürkiyeTürkçeTurkishSputnik ایرانPersianPersianSputnik افغانستانDariDari
Central Asia
ҚазақстанҚазақ тіліKazakhКыргызстанКыргызчаKyrgyzOʻzbekistonЎзбекчаUzbekТоҷикистонТоҷикӣTajik
East & Southeast Asia
Việt NamTiếng ViệtVietnamese日本日本語Japanese中国中文Chinese
South America
BrasilPortuguêsPortuguese
NewsfeedBreaking
12:07 GMTNBA Superstar LeBron James Fined $15,000 for Obscene Gesture
12:03 GMTPoking the Bear, US Warns Russia All Options on Table
11:49 GMTSolomon Islands Opposition Plans No-Confidence Vote Against Prime Minister, Reports Say
11:38 GMTOmicron: Indian Politicians Urge PM Modi to Ban Flights From Affected Countries Amid COVID Scare
11:27 GMTLive Updates: First Cases of Omicron Coronavirus Variant Confirmed in Germany and Czech Republic
10:47 GMTUS Backs Restoration of Peace in Solomon Islands After PM Accuses Foreign Powers of Fuelling Unrest
10:40 GMTBoJo to Unveil Crackdown on Crime to Return to 'Bread-and-Butter Politics' Amid 'Sleaze' Row: Report
10:34 GMTAlex Ovechkin Sets Yet Another Record, Inching Closer to Becoming NHL's All-Time Scorer
10:25 GMTSouth African Medical Association Says Omicron Variant Causes 'Mild Disease'
08:45 GMTJapanese PM Kishida: Tokyo Eyeing Enemy Base Strike Capability Amid China and NK's Military Buildup
08:34 GMTBiden's Re-Election Bid: Should US Politicians & Justices of Advanced Age Undergo Cognitive Tests?
08:21 GMTAt Least Two Killed in UK as Storm Arwen Pounds Parts of Country
07:58 GMT'Dry Turkey' on 'Stolen Land': BLM Faces Twitter Backlash for Blasting Thanksgiving
07:25 GMT'End of an Era': Celebs Pay Tribute to Broadway Legend Stephen Sondheim
07:00 GMT'Thank God I Didn't Lose Any Teeth': Ovechkin Receives Stitches After Puck Blow to His Face
06:12 GMTNetizens in Grip of Guesswork After WHO Skips Two Greek Letters to Name New COVID Variant
05:55 GMTAustralia Halts Flights From 9 Southern African Countries Over Omicron Strain
05:24 GMTKanye West Says God Wants to Bring Him and Kim Together Again
05:10 GMTAs Indian Health Survey Suggests Women Outnumber Men Expert Claims 'This Isn't the Real Number'
04:50 GMTP&G Recalls Over a Dozen Old Spice, Secret Sprays After Detection of Cancer-Causing Chemical