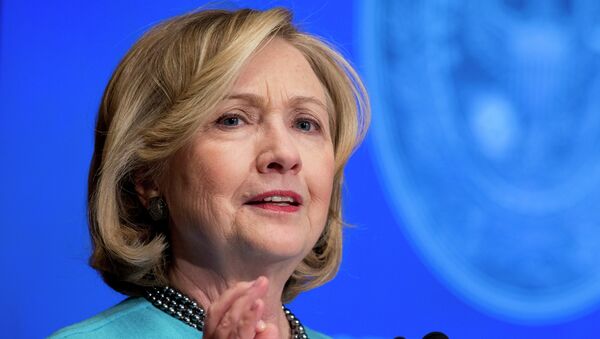 © AP Photo / Carolyn Kaster
Subscribe
A US federal judge stated that Democratic presidential candidate Hillary Clinton’s use of a private server for official emails while serving as secretary of state was a violation of government policy, media reports said.

WASHINGTON (Sputnik) — Sullivan was presiding over a hearing on Freedom of Information Act (FOIA) submissions for the release of Department of State records, Politico reported.

"We wouldn’t be here today if this employee had followed government policy," US District Judge Emmet Sullivan said in an apparent reference to Clinton, according to a report on the Politico web site on Thursday afternoon.

In a further comment from the bench, Sullivan said the case was an unusual one because "there was a violation of government policy," apparently referring to Clinton’s admitted use of a private email server to conduct official business from her home, the newspaper said.

US State Department Denies Giving Blackberry to Clinton
In the case, Department of Justice lawyer Peter Wechsler argued that the FOIA usually does not permit the search and public release of e-mails from the private accounts and servers of US government officials. However, Wechsler admitted that the circumstances in this case were different, the report said.

Sullivan did not define or further elaborate on how he believed Clinton had violated government policy, according to the Politico account.

The judge repeatedly referred to the State Department’s obligation to preserve its records under the Federal Records Act of 1950, and emphasized that he was determined to investigate the issue thoroughly, the report said.

Politico also reported that Sullivan noted the State Department needed to question Clinton as to whether anyone else might still possess copies of official records from her four years as secretary of state.

Moreover, Sullivan emphasized that the public’s general right to privacy did not apply in this case because of the official position Clinton had held.

Clinton’s Decision to Use Private Email Server ‘Stupid, Dangerous’
"We’re not talking about a search of anyone’s random email," the newspaper reported Sullivan as saying.

Clinton continues to argue that her use of a private email account while secretary of state was legal and within approved government policy.

She told reporters in Las Vegas on Tuesday that what she did was "legally permitted."

However, Sullivan’s comments contradict her current argument and position on the issue.

"The Clinton campaign and Clinton attorney David Kendall did not immediately respond to a request for comment on the judge’s remarks," Politico stated.

In the FOIA case, the conservative group Judicial Watch is trying to get records released about the conditions under which one of Clinton’s closest friends and deputy chief of staff at the State Department, Huma Abedin, was paid and employed while still doing private consulting work.