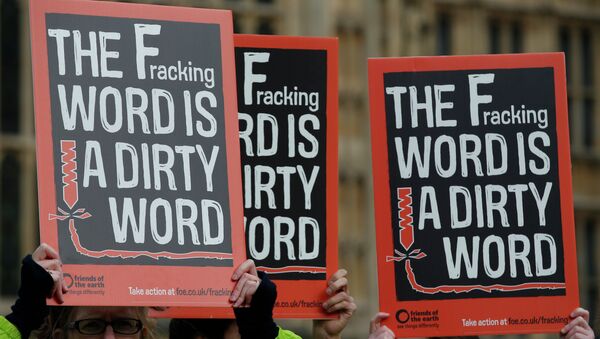 A heavily redacted report into the impact of fracking in the UK has finally been released after the Information Commissioner ordered the British government to publish it as "DEFRA [Department for Environment, Food and Rural Affairs] has incorrectly withheld the information."

The Commissioner told DEFRA it should "disclose an unredacted copy of the report" and if it didn't, it may be "dealt with as a contempt of court."

Pages once blacked out detailing the risks of living near a fracking site are now clear to read and have been described as "alarming".

The 'frack-happy' United States has already carried out fracking impact studies which contributed to the UK's report into fracking and the impact it has on people, their homes and the environment in rural Britain.

FRACKING. Government FORCED to publish report showing that it is detrimental to the country. What these Tories will do to make money eh?

The redacted report by the British government includes concerns raised in the US.

"Noise and light have also been cited in the US as environmental and health concerns for residents and animals living near drilling operations. Excessive and/or continuous noise, such as that typically experienced near drilling sites, has documented health impacts.

"According to community reports near these sites, some residents may experience deafening noise; light pollution that affects sleeping patterns. Noxious odors from venting gases can also impact on air quality for local residents."

"Overall the evidence on impact on property prices in the literature is quite thin and the results are not conclusive. There could potentially be a range of 0 to 7% reductions in property values within 1 mile of an extraction site to reflect the impacts."

"Properties located within a 1 — 5 mile radius of the fracking operation may also incur an additional cost of insurance to cover losses in case of explosion on the site. Such an event would clearly have social impacts", the report says.

Massive congratulations to the COMMUNITY in #Lancashire who kicked the frackers out! This is YOUR day! #FrackStopsHere

Meanwhile, Britain's Prime Minister David Cameron told MPs that he is still hopeful that fracking will happen, "whether in Lancashire or elsewhere."