US, China Set Example for Others to Follow in Pricing Carbon - Kerry 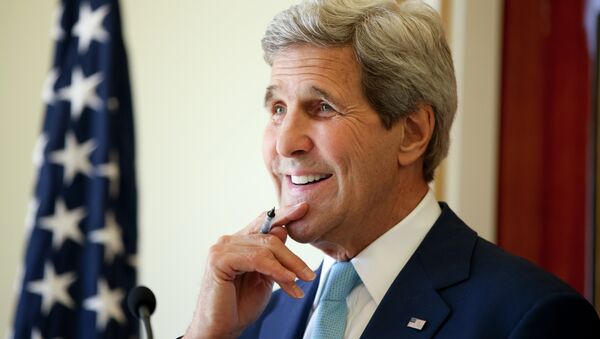 The United States and China might set an example for other countries to follow to reduce greenhouse gases by pricing carbon, US Secretary of State John Kerry said during the discussion at the US-China Strategic and Economic Dialogue in Washington, DC.

WASHINGTON (Sputnik) — Kerry also noted that in such a market, prices and cost will be reduced while efficiency and productivity increased.

“This is where China-US cooperation is so critical — to begin to price carbon and begin to move in the opposite direction, the rest of the marketplace will follow,” Kerry stated.

Kerry argued that Beijing and Washington should “excite” the marketplace to look to low-carbon solutions.

White House Announces $4Bln in Private Sector Commitments to Clean Energy
“Literally there are millions of jobs to be created, unbelievable opportunities in solar, solar thermal, wind, hydro alternatives — in all the alternative and renewable fuels,” he said.

The United States intends to reduce its carbon emissions by 28 percent in 2025, while China plans to increase its share of non-fossil fuels used in primary energy consumption to about 20 percent by 2030, according to the White House.

The US-China Strategic and Economic Dialogue has been held since 2009. The forum is a mechanism to generate cooperation between the two countries.