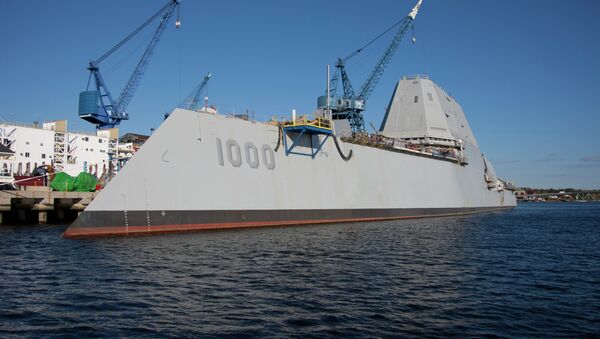 The United States plans to relocate advanced military hardware, including its newest stealth missile destroyer, to the Asia-Pacific region as tensions are growing between Washington and China over South China Sea, one of the key waterways globally.

No Chinese Weapons on Reclaimed Island in South China Sea - Beijing
The United States has repeatedly expressed concern over China's growing assertiveness in the region, specifically the reclamation of the Spratly Islands in the South China Sea, an area subject to overlapping territorial claims from Brunei, Malaysia, Taiwan, the Philippines and Vietnam.

Beijing has always insisted that the majority of the islands in this part of the Pacific Ocean are its sovereign territory. The authorities have defended the construction in the Spratly region as a legal and peaceful endeavor that will improve security in the region to the benefit of all.

China has also warned that Washington's meddling in the Asia-Pacific might upset regional stability.

Not eager to change its stance on the issue, the United States opted for more saber rattling last week. On May 30, US Defense Secretary Ash Carter pledged to "bring the best platforms and people forward to the Asia-Pacific" as part of America's rebalancing strategy.

'Don't Tell Me What to Do': China Warns US Over South China Sea Meddling
The cutting-edge military hardware that Carter promised to deliver includes the latest Virginia-class submarines, P-8 Poseidon surveillance aircraft, the newest stealth destroyer, the Zumwalt, and a brand-new carrier-based E-2D Hawkeye early-warning-and-control aircraft.

China's reclamation project on the Spratly Islands might be the obvious apple of discord but Washington's pivot to Asia is guided by a larger concern.

The United States worries that "China now has an interest in trying to become a more prominent international power in the region and elsewhere," analyst William Beeman told Iran's Press TV.

According to the expert, Beijing was focused on its economy and trade with foreign partners, "but it hasn't really been a strong political power" up until recently. Washington is concerned that this is about to change.

"So, this is one of the situations where the United States has always had an interest in southeast Asia and their concern [is that] China is taking over the influence of the United States and other Western nations in the region," Beeman said.