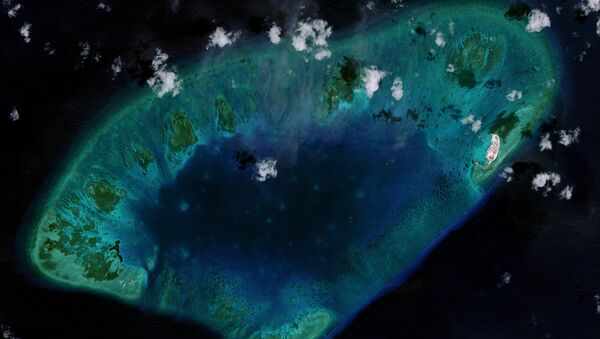 © REUTERS / CSIS Asia Maritime Transparency Initiative
Subscribe
China urged the United States to refrain from provocative remarks let alone actions in the South China Sea as tensions over the hotly disputed stretch of water are on the rise.

"A few countries keep stirring up troubles in the South China Sea for [their] own selfish gains and provoking China's territorial sovereignty and maritime rights and interests, while there are some other people who incite them to do so," China's foreign ministry spokeswoman Hua Chunying said.

War of Nerves: US and China Walking the Razor Edge in South China Sea
Beijing considers most part of the South China Sea its own territory but Brunei, Malaysia, Taiwan, the Philippines and Vietnam have made their claims over this part of the Pacific Ocean.

China has repeatedly warned the United States against getting involved in the territorial dispute because Washington is not a party to the issue. But the US seems to remain unconvinced.

On Wednesday, US Defense Secretary Ashton Carter said that "[China's actions are] increasing demand for American engagement in the Asia-Pacific, and we're going to meet it."

The war of words between Beijing and Washington escalated following an incident last week, when a US P8-A Poseidon surveillance aircraft flew over the contested Spratly Islands despite China's warnings to leave the airspace over the archipelago.

On May 22, the US Department of State rejected Beijing's demands that US surveillance planes stop flying over disputed territory in the South China Sea, which China singled out as one of the most important regions in its first military strategy white paper.

"If the major powerhouse of world economic growth is thrown into chaos, will that serve the interests of the American side?" Hua Chunying asked during the Wednesday briefing.

Over the past few months, China has been constructing artificial islands on coral reefs in the Spratly islands region. Alarmed by these developments, the United States has repeatedly called on the Chinese authorities to halt the construction project, which Beijing defends as a peaceful, legal and universally beneficial endeavor.

China Maps Out 'Active Defense' Military Strategy Aimed Against Hegemonism
Carter reiterated the sentiment in a speech at the Pearl Harbor military base in Hawaii, calling for an "immediate and lasting halt to land reclamation by any claimant."

"We have our own judgment and nobody has the right to tell China what to do," Hua Chunying responded.

Xinjua news agency called Carter's remarks "not only unjustified but also harmful to regional peace and stability" in an editorial published on Thursday.

"Clearly, the United States wanted to play up China's construction activities and portray the country as a threat to regional stability, in a dangerous and irresponsible move that may lead to miscalculation and untoward incidents," the Chinese news agency added.