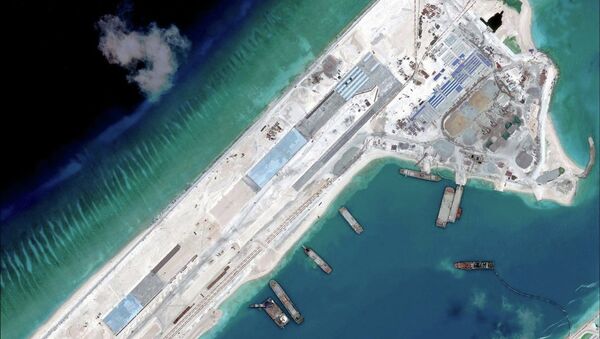 © REUTERS / CSIS/Digital Globe
Subscribe
China denied any knowledge of weapons it allegedly placed on a reclaimed island in the South China Sea, a Foreign Ministry spokeswoman said in Beijing on Friday.

Earlier it was reported that US intelligence had spotted a pair of mobile artillery systems on one of the artificial islands China is now erecting in the disputed sea.

A US military official told the Wall Street Journal that the artillery pieces visible on surveillance plane footage posed no threat to US ships and aircraft, but could effectively cover the neighboring islands.

In Beijing, China's foreign ministry spokeswoman Hua Chunying said she had no information on the weapons.

“I don’t know what you are talking about. China has on numerous occasions clarified its position concerning the construction of islands in the South China Sea,” she said.

The South China Sea is the subject of numerous rival territorial claims on an area that includes fertile fishing grounds and potentially rich reserves of undersea natural resources.

Beijing Protests US Surveillance of South China Sea
In addition to China, Brunei, Malaysia, the Philippines, Taiwan and Vietnam also claim at least parts of the South China Sea.

In other parts of the world similar disputes also touch upon China’s relations with Japan and South Korea.

The United States is urging the sides to seek a negotiated settlement and avoid an escalation while, at the same time, trying to cement its own strategic alliance with a number of regional powers at loggerheads with China.

Alarmed by China’s efforts to build up its presence in the disputed region, Washington is prepared to retaliate.

During recent congressional hearings in Washington, David Shear  the Assistant Secretary of Defense for Asian and Pacific Security Affairs, said that the US was assessing the military consequences of China’s “territorial claims” and was “preparing a response”.