Bush Vs. Bush: Jeb Tosses W. Under the Bus Over Iraq Invasion 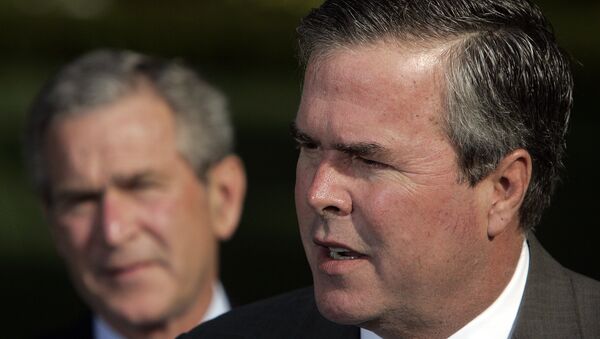 Before even formally announcing his presidential candidacy, Jeb Bush has already faced heated controversy for claiming that he would have invaded Iraq, even with current hindsight that it was a colossal mistake. He’s since flip-flopped, and one college student has called him out, confronting Bush with an uncomfortable truth.

"I would have,” Bush responded, “and so would have Hillary Clinton," he added, tossing her superfluously under the bus, as well.

The statement has faced a wide backlash from both the left and right. The former because it proves everything voters need to know about a third Bush presidency, the latter because it provides fuel for the Democrats.

With hardly anyone – even the most right-wing hardliners – supporting Bush’s answer, he has backtracked a bit.

"I would not have gone into Iraq," Bush said Thursday during a town hall event in Tempe, Arizona.

But even this was prefaced with the fact that Bush has a strong disliking for something every presidential candidate has to face: hypotheticals.

"Here’s the deal: If we’re all supposed to answer hypothetical questions, knowing what we know now, what would you have done, I would have not engaged."

Jeb Bush, of course, should face hypothetical questions. By the dozens. By the thousands. Given that he has never been president before, how else can the American public learn what his decision making process would be once elected to one of the highest positions in the world?

He also seemed to have no problem with hypotheticals when the question was originally posed by Megyn Kelly. Bush didn’t skip a beat – barely even blinked – before nodding in the affirmative.

Many have been left unimpressed by Bush’s explanation, not least of which is Ivy Ziedrich, a 19-year-old student at the University of Nevada. At the end of one of the presidential hopeful’s town hall meetings, Zeidrich hit him with something unexpected.

"It was when 30,000 individuals who were part of the Iraqi military were forced out – they had no employment, they had no income, and they were left with access to all of the same arms and weapons," Ziedrich told him.

Bush, who we already know is not the biggest fan of hypotheticals, asked her if she had a question.

"My question is why are you saying that ISIS was created by us not having a presence in the Middle East when it’s pointless wars, when we sent young men to die for the idea of American exceptionalism?"

"It’s this idea," she added. "Like, why are you spouting nationalistic rhetoric to get us involved in more wars?"

A flabbergasted Jeb said that he "respectfully disagreed" with Ziedrich’s assessment of the Iraq War, and went on to blame the terrorist group’s formation on President Obama’s decision to withdraw troops from Iraq.

"And we had an agreement that the president could have signed that would have kept 10,000 troops, less than we have in Korea, could have created the stability that would have allowed for Iraq to progress. The result was the opposite occurred. Immediately that void was filled."

So, before officially declaring his bid, we now know that a Jeb Bush presidency would jump into a foreign conflict based on faulty intelligence, and would then continue to bolster that mistake with a military presence significantly longer than the eight years US troops remained in Iraq.