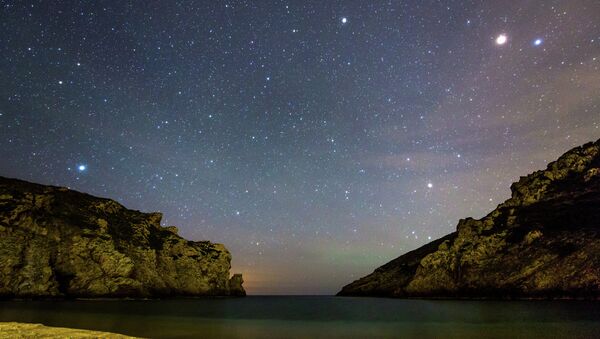 Life, as we know it, requires water. We find organisms wherever it exists, even in the deepest, coldest oceans. New research suggests that Earth’s massive stockpile of H2O could have come from asteroids, and the same kind of cosmic delivery could be occurring all across the universe.

If you buy into the panspermia hypothesis, then life on Earth began beyond our atmosphere. On Mars, most likely, but potentially even further planets. Microorganisms could have then been brought to our world by asteroids or comets.

"Life could spread from planet to planet or from stellar system to stellar system, carried on meteors," Stephen Hawking said at the Origins Symposium in 2009.

If not life, a new study strongly suggests that asteroids could be major bearers of water across the cosmic void. Published by the Royal Astronomical Society, the research suggests that "rather than being unique, water-rich asteroids similar to those found in our Solar System appear to be frequent."

This means that if Earth got its water from fairly common asteroids, then any number of other planets may also contain liquid water.

"It is believed that the Earth was initially dry, but our research strongly supports the view that the oceans we have today were created as a result of impacts by water-rich comets or asteroids," Dr. Roberto Raddi, the study’s lead researcher, said.

A large portion of the study’s proof comes from a white dwarf known as SDSS J1242+5226. Observed by the William Herschel Telescope in the Canary Islands, the star contained an unusually large amount of hydrogen and oxygen in its atmosphere.

That suggests that the star was seeded by an asteroid.

Since oxygen is a heavy element which sinks into a star’s lower atmospheres, scientists can detect the traces of hydrogen, which tends to stay toward the surface.

"In contrast, hydrogen is the lightest element; it will always remain floating near the surface of the white dwarf where it can easily be detected," co-author Professor Boris Gansicke, explained.

"There are many white dwarfs that hold large amounts of hydrogen in their atmospheres, and this new study suggests that this is evidence that water-rich asteroids or comets are common around other stars than the Sun."

A damper universe can only be good news in the hunt for the extraterrestrial life. Who knows, maybe some of those meteors could essentially be mini-oceans, flying across the galaxy and already teeming with life.