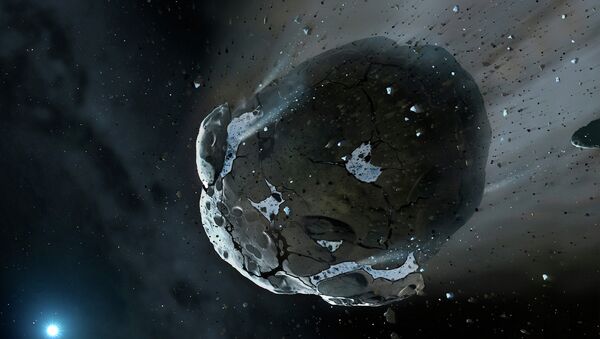 Asteroid mining may not be the stuff of sci-fi flicks for long, as one company prepares to launch its first exploratory satellite from the International Space Station in July.

Planetary Resources is one of the companies hoping to strike it rich by mining the mineral resources of asteroids. And the company's Arkyd-3R — currently docked at the ISS — is ready for its first demonstration mission, an initial test that will lay the groundwork for future probes to start mining valuable resources on near earth asteroids (NEAs).

"During its 90-day Earth-orbiting mission, it will send back data on the health of its subsystems to our team at our headquarters in Redmond, Washington, and complete its mission with a fiery re-entry into Earth’s atmosphere as a result of its natural atmospheric orbital decay," representatives of the company wrote when the probe was finally on its way to the ISS in April via SpaceX's Falcon9 rocket.

The Arkyd-3R (for "Reflight") is a second attempt to get a test probe launched from the ISS. The first Arkyd-3 was destroyed in the October 28 explosion of Orbital's Antares rocket, in an attempt to bring supplies to the ISS. Both Orbital and SpaceX have multi-billion contracts with NASA for resupply missions to the station.

The Arkyd-6 will follow later this year, and its mission will be "not only to test the scientific instruments and deep-space technologies at the heart of our asteroid-prospecting missions, but to also provide a platform that will allow others to fly their mission with our technology," Planetary Resources says.

Planetary Resources made headlines when high profile investors like Google's Larry Page, Eric Schmidt and Bechtel Corporation decided to back their ventures. And they also broke innovative financing ground  in 2013 when they used Kickstarter to crowdfund their Arkyd-100 telescope, scheduled to launch later this year.

Deep Space Industries (DSI)  is another player on the asteroid mining scene, and plans to launch their first scouts in 2016. DSI's "business is based on supplying what commercial customers in Earth orbit need to operate, as well as serving NASA’s needs for its Moon and Mars exploration,” said CEO Daniel Faber in a press release last year after DSI won two contracts from NASA.

Of particular importance for ventures like DSI is the idea of harvesting materials needed for space exploration in space itself, so as to avoid the enormous costs of having to launch them out of Earth's atmosphere.

"Right now it costs $17 million per ton to get anything up to geosynchronous orbit," David Gump, vice chairman of Deep Space, told the Boston Globe in November. "If we can beat whatever that price is in 2022, we'll have a big market."

Water, in particular, could be a key resources for these asteroid miners, since its component parts — hydrogen and oxygen — are needed for rocket fuel.

"Asteroids hold the resources necessary to enable a sustainable, even indefinite presence in space — for science, commerce and continued prosperity here on Earth," Chris Lewicki, president and "chief asteroid miner" of Planetary Resources, said in a statement about a NASA contract of their own.

While space exploration has only recently become a private-sector venture, after decades dominated by publicly funded bodies like NASA or the European Space Agency, opinions on the role of private industry versus government programs remains split, depending on who you ask.

Lewicki, perhaps unsurprisingly, thinks that the future is privately funded, and directed towards commercial purposes. He told Mic.com that, in resource mining, "we will find an economic engine to fund the exploration of space."

"I think it is the golden age of the new space race," Lewicki said of the private sector's entrance into the field. "Rather than two competing superpowers, what we really have now is dozens, maybe even hundreds, of competing capitalists."

When asked about the future of space businesses, Neil deGrasse Tyson agreed there's a fortune to be made by those who get in on the ground floor of the asteroid game.

"The first trillionaire there will ever be is the person who exploits the natural resources on asteroids," he said in an interview on CNBC's On the Money.

But he disagreed about the role of the government, and said the starting point will be with state funded programs, not private initiatives, due to the initial startup costs, and the long wait until a real return on investment for a private company.

"The first Europeans to the New World were not [part of] the Dutch East India Trading Company," he pointed out. "It was Columbus — paid by Spain. It was a national initiative."

Both companies have been contracted by NASA and at least initially, their financial viability depends partly on supplying existing public ventures with services and resources.

"During the current prospecting phase, Deep Space revenue sources include providing data to scientists and NASA, and enabling corporate marketers to activate their customers through direct participation in the asteroid adventure," David Gump, Vice Chair and Director of Marketing for DSI explained in a statement.

Meanwhile, NASA gets valuable information from the companies while saving money on research and development costs, as they try to get in on the asteroid action themselves.

On the heels of the ESA's successful Rosetta mission, safely landing its Philae module on a comet, NASA plans to land its own spacecraft, the OSIRIS-Rex, on an asteroid known as Bennu, in September 2016.