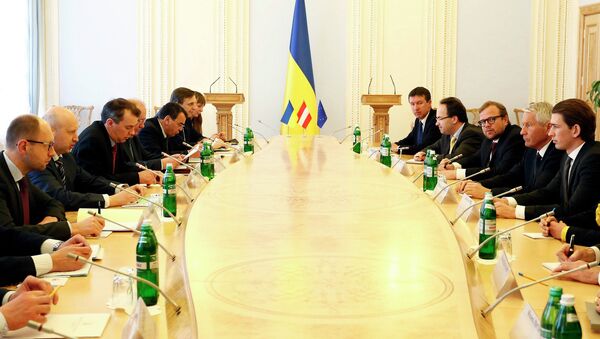 © Flickr / Bundesministerium für Europa
Subscribe
Dmitry Linnik
All materials
The Council of Europe and Ukraine have signed an Action Plan for 2015-2017. It is presented as evidence of the new Ukraine’s brave dash towards Europe and its values. So much so that many tend to forget this is in fact a third CoE Action Plan for Ukraine.

Indeed, the previous government of the deposed president Victor Yanukovych signed a similar document in 2011. And there was one for 2008-2011 enacted by the incumbent Victor Yushchenko.

So the latest Action Plan is nothing dramatically new.

There is basically nothing wrong with the Ukraine Action Plan, it is, in the words of the Russian Foreign Ministry, ‘generally on the right track’ — promoting as it does constitutional reform, rule of law and human rights.

In fact, Verena Taylor, one of the senior officials of the Council of Europe, points out that “human rights are the foundation on which every other aspect of the plan rests”. Most of the 45 million euros allocated for the Plan is to be spent on the various aspects of improving human rights, which covers internally displaced persons, police practices, freedom of expression, etc.

It is therefore a bit puzzling why the CoE Secretary General Thorbjørn Jagland in the run up to the signing singled out Ukraine’s territorial integrity as a cornerstone of the Plan. No reference to the democratic will of the people of East Ukraine and no mention of civilians still dying there in the course of what Kiev defines as an ‘anti-terrorist operation’.

In relation to human rights the Action Plan points to the need to protect Crimean Tatars as one of the targeted priorities in the ‘Minorities’ section of the Plan. Interestingly, ethnic Russians living in Ukraine do not merit a mention even though they are of course the biggest minority by far.

One other important point in the Action Plan — though perfectly standard — has to do with fighting corruption. A noble pursuit, no doubt. In its compliance report the CoE states that Ukraine “implemented over half of its recommendations in a satisfactory manner… The government of Ukraine has been active in its efforts to fight corruption, through reforms to its legal and institutional framework tackling corruption, cybercrime…”

The interesting thing about this compliance report is that it was published in March 2014, that is weeks after the overthrow of President Yanukovych. That would suggest that the conclusions would relate to the work of his government. So either the Yanukovych government was not as brazenly corrupt as we are now led to believe or the Council’s expertise on this and perhaps other matters should be taken with a grain of salt.

According to Verena Taylor, ‘there are loads of anti-corruption measures in effect in Ukraine’ — apparently those adopted in the one year since the new government took power in Kiev.

But there is absolutely no evidence of a decrease in corruption in Ukraine, not according to Transparency International or similar organisations. On the contrary, allegations of corruption abound in Ukraine itself and some claim that it’s got worse since the previous government.

Still, this should not obscure the bigger picture: there is nothing wrong with the goals that the Council of Europe sets before Ukraine and its other member-states. In Ukraine’s particular case, the CoE is perfectly right in promoting the idea of constitutional reform based on the broadest public consensus as well as judicial reform, decentralisation and fair elections.

Secretary General Thorbjørn Jagland’s specific agenda, however, suggests that politics may be at the top of his list of priorities, not exactly in line with the Council of Europe’s declared fundamental principles.

In his previous capacity as Chairman of the Nobel Prize Committee, Jagland stirred up a considerable amount of controversy when the 2009 Peace Prize was awarded to US president Barack Obama.

In 2012 the Peace Prize went to the European Union, of which the former Norwegian premier is said to be a big supporter. On both occasions the motives of the Nobel Committee were widely questioned and criticised. Just two weeks ago the five-person Norwegian Nobel Committee took an unprecedented vote to remove Jagland from the post of Chairman though he kept one of the five seats.