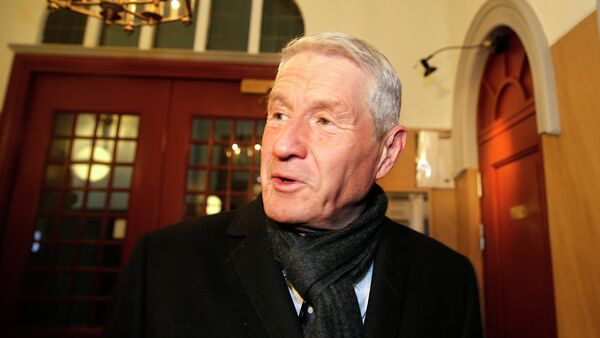 Thorbjoern Jagland has been deposed as the chairman of the Nobel Peace Prize Committee, the first time that this has happened in the committee's 114-year history.

Thorbjoern Jagland, an ex-prime minister of Norway and Labor party politician had been heading the Committee since 2009; however, he was controversially ousted on March 3, 2015 and replaced with Kaci Kullmann Five, a Norwegian businesswoman and former leader of the Norwegian Conservative Party.

Ms. Five refused to provide any comment on the unusual decision of the Nobel Peace Prize Committee, stressing that a chairman is selected each year and praising Jagland as a "good leader."

However, experts note that Thorbjoern Jagland's demotion was caused by the growing controversy over his actions as the head of the prestigious organization. At least half of the six Nobel Prize laureates chosen by Jagland have provoked a fierce debate.

President Barack Obama, who became the prize-winner in 2009 "for his extraordinary efforts to strengthen international diplomacy," was given the award less than a year after he entered office. Just two years later, the Nobel Peace Prize laureate unleashed a war in Libya that resulted in the collapse of the country's economy and political structure. Thorbjoern Jagland's had seemingly turned a blind eye to the US's numerous drone strikes on Yemen and Pakistan as well as to the country's long-standing military presence in Afghanistan and Iraq.

In 2010 the decision to give the award to Chinese dissident Liu Xiaobo also raised more than its fair share of controversy. However, public disenchantment reached its peak in 2012 when the Nobel Prize Committee awarded the European Union as its laureate. Jagland's decision was slammed by critics who cited the EU's evident economic and political failures. Some experts even went so far as to claim that the Nobel Prize had ultimately become a political instrument.

Norway's right-wing politicians, who recently gained a majority in the country's parliament decided to appoint Kaci Kullmann Five, and in so doing, removing the controversial ex-chairman from his position.

Alexei Pilko, the director of the Eurasian Communications Center, pointed out that the image of the prestigious award had been undermined even before Jagland's appointment. The decisions made by the Nobel Committee sometimes lack objectivity, although many of its prize-winners were awarded fairly, Pilko noted. According to the expert, under Jagland the committee was unreasonably promoting a unipolar view of the world, exaggerating the role of the West in international affairs. However, Pilko expressed his confidence that the organization could restore its prestige, stressing the importance of complete objective and independent international institutions.